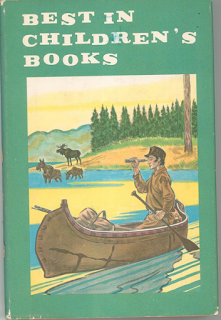 Let's go vintage! This title is the thirty-first volume in a long series of books called Best in Children's Books. It was published in 1960 by Nelson Doubleday. It blends fiction and nonfiction, prose and poetry. It has many contributing authors and illustrators.

Lewis and Clark: Explorers of the Far West by Smith Burnham with illustrations by Edward Shenton. This is an excerpt from Hero Tales from History (1922, 1930, 1938). If there is a politically incorrect buzzword related to Native Americans--this story has it in abundance: savage, powwow, red men, peace-smoke talk, redskins, red braves, war dance, peace dance, scalp dance, snake dance, papoose, etc. There are better stories of Lewis and Clark to share with young readers these days.

Tattercoats by Joseph Jacobs with illustrations by Colleen Browning. This little story reads like a fairy tale. It even has a little romance. 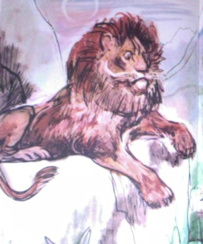 Singh Rajah and the Cunning Little Jackals by Mary Frere with illustrations by Edy Legrand. This is an excerpt from Old Deccan Days or Hindoo Fairy Legends Current in Southern India (1898). This is an animal story about a LION who is tricked by a family of jackals who don't want to be eaten--they are the last animals in the jungle. What I like best about this story are the color illustrations.

The Middle Bear by Eleanor Estes with illustrations by Phyllis Rowand. This is an excerpt from The Middle Moffat (1942). The Moffats are in a play for charity. The play is The Three Little Bears. It's quite charming.

Chips, The Story of a Cocker Spaniel (1944) by Diana Thorne and Connie Moran with illustrations by Phoebe Erickson. This is a sweet though predictable story of boy meets dog. 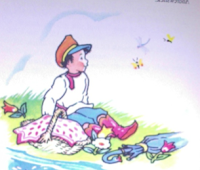 The Picnic Basket by Margery Clark with illustrations by Maud and Miska Petersham (1924). This is an excerpt from The Poppy Seed Cakes. This one is illustrated in color. And the illustrations are very interesting--bright and colorful. If you enjoy vintage work, then these illustrations will prove appealing. The story itself is about a boy and his Auntie going on a picnic together. There are plenty of twists and turns in this one!


Just when I'm ready to
Start on my ears,
That is the time that my
Soap disappears.
It jumps from my fingers and
Slithers and slides
Down to the end of the
Tub, where it hides.
And acts in a most diso-
Bedient way
AND THAT'S WHY MY SOAP'S GROWING
THINNER EACH DAY. (86)

Go Fly a Kite is a nonfiction piece by Harry Edward Neal with illustrations by Harvey Weiss. I found it boring, you may find it instructional.

Salt Water "Zoos" is another nonfiction piece. No author is given credit. It is essentially about large aquariums and oceanariums. (This book was published several years before the first Sea World opened. My guess is it used to be a lot harder to see dolphins and sharks and the like.) The focus is on Marineland of Florida.

Cornelia's Jewels by James Baldwin with illustrations by Don Freeman. This one is short and historical in nature. The overall tone is very sweet with a focus on family. Cornelia's "jewels" are her two boys.

Three Seeds by Hester Hawkes with illustrations by Hildegarde Woodward (1956). This story is about a boy and his garden. The setting: the Philippines. Luis, the hero, misses his father who works in Manila most of the time. He can only come visit his family once or twice a month. One week he brings home a package of American seeds. The packet must have had a hole, however, because only three seeds remain. (The title spoils it all doesn't it?) The boy has hope, however, and with the help of a kind neighbor, the three seeds are planted...and from those three seeds comes a promising future.

Let's Go to Iceland and Greenland. This is a sad little feature, again no author is given. Readers do get five photographs and one map.