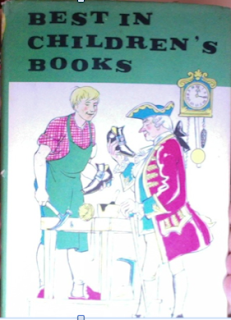 Let's go vintage! This title is the sixth volume in a long series of books called Best in Children's Books. It was published in 1958 by Nelson Doubleday. It blends fiction and nonfiction, prose and poetry. It has many contributing authors and illustrators.

The Story of Early America by Donald Culross Peattie, illustrated by Leonard Weisgard. This is an excerpt from A Child's Story of the World (1937). Honestly, I think I enjoyed the illustrations more than the text. Readers should know two things 1) These two chapters do not hold up to the test of time. They didn't age gracefully, in other words. 2) They contain passages with the potential to offend in varying degrees.

When Columbus landed, some naked red men on the shore ran away. After a while their childish curiosity got the better of them, and they came stealing out to meet the newcomers. (10)

He saw that these people were much more simple-minded than criminals from the jails of Spain. (11)

They were so evidently savages, and not the rich, civilized people that he expected to meet in India. So he called these men Indians, and so they have been called ever since, though of course our redskins have nothing to do with the real people of India. (11)

So the Spanish, Portuguese, and English sent ships to Africa to capture the jungle Negroes. They were thrown into boats and brought to America. The Negroes had powerful bodies. They did not mind the intense heat. They were afraid of the white men, and knew that they could never escape back across the sea. So they bent their backs to the hard labor and tried to be cheerful. They made good slaves. (23)

In the northern states slavery soon died out. One reason for this was that, in the North, factories and not farming were the important way of making money. Intelligent men were needed to work in factories. The Negroes, fresh from jungle life, were not ready for such work. But in the South, where tobacco, cotton, and rice were rich crops which all the world was clamoring to buy, the Negro slave could work better than the free white man. He did not have to use his head, but only his muscles. (31-2)

The Very Little Girl (1953) is by Phyllis Krasilovsky and illustrated by Ninon. This is a charming, delightful, very unoffensive little piece about a little girl who slowly but surely finds herself growing up. 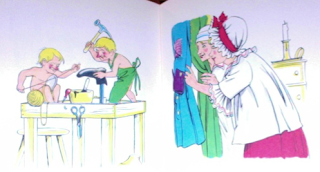 The next story is The Shoemaker and The Elves by Jakob and Wilhelm Grimm illustrated by Fritz Kredel. This is the traditional story. The illustrations are something. And it is an illustration from this story that is on the cover of this book.

A Child's World in ABC by Mary Warner Eaton, illustrated by Charlotte Steiner. This piece was written specifically for this book. I liked this one well enough. I liked the illustrations especially. But that doesn't mean it aged well. 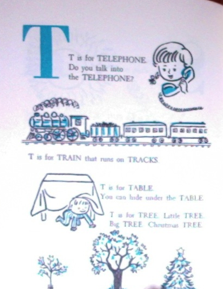 Your Breakfast Egg is by Benjamin C. Gruenberg and Leone Adelson. Illustrated by Leonard Kessler. This was first published in 1954. It is an excerpt from YOUR BREAKFAST AND THE PEOPLE WHO MADE IT. Essentially it is a nonfiction piece celebrating "modern" and "scientific" advances in how chickens are kept, raised, etc. Celebrate the fact that your hens no longer have to go outside and find their own food to eat! Rejoice that now--day and night--they are kept inside cages and are fed with "all kinds of grains and other foods that are good for them." This chapter made me shudder. I had read about this in The Dorito Effect, of course, as one of the many illustrations of what is wrong with food. But this is a period-piece, if you will, showing how silly we can be.

Life in the Arctic and This is Italy are short nonfiction pieces with no given author. Both include a few photographs.

The Saddler's Horse by Margery Williams Bianco, illustrated by Grace Paull, is a short story about a saddler's horse and a cigar-store wooden Indian having a runaway adventure together.

Dick Whittington and His Cat is adapted from James Baldwin and illustrated by Peter Spier. I read a picture book by Marcia Brown (1950) last year and really enjoyed it. This story is nice, nothing unexpected, but nice.

Concluding Thoughts: The book is "flawed" in some ways in that a few of the pieces in this one reveal an America with a very different value system. But it's an opportunity to celebrate how far we've come in understanding one another as well. Some pieces sit "heavy" and others are just very light delights.