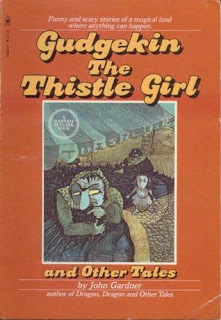 If you enjoy folk or fairy tales, you might be a potential reader of John Gardner's story collection. The book contains four stories: "Gudgekin the Thistle Girl," "The Griffin and the Wise Old Philosopher," "The Shape-Shifters of Shorm," and "The Sea Gulls."

I think my favorite story is Gudgekin the Thistle Girl. The heroine is a poor girl named Gudgekin. Every day she gathers thistles for her stepmother. The stepmother is never, never satisfied. But Gudgekin keeps going out to do her best. One day a fairy intervenes and her luck is seemingly changed forever. With the fairies help, she's able to appease her stepmother and please herself. The fairies do the work, while she's spirited away to have fun. One day--again with the fairies help--she meets a Prince who falls in love with her. You might think you know where this one is headed, and, in a way you'd be right. But it is how long it takes for these two to get to happily ever after that may surprise you.

The second story confused me greatly. After the fifth or sixth time through the first two or three pages, it finally clicked that maybe just maybe it was intentional. The griffin visits the poor villagers to distract, confuse, and frustration. No one can remember how to do anything when he is nearby. Eventually I found the rhythm of this story. I still don't like it.

The Shape Shifters of Shorm, the third story, was entertaining. I liked it. But I didn't really love it. Essentially, a kingdom is being bothered by shape-shifters, the king offers an award for anyone who rids the kingdom of all the shape-shifters. A few step forward and volunteer for the task. But none are ever heard of again. Why?!

The Sea Gulls is an odd story. It contains plenty of magic, some spells, etc. I think it is an appealing enough story for readers. Essentially in that story, a king is met one day by an ogre who wants to eat him. The king says let's play a game of chance. If you win, you eat me. If I win, you wait seven years and eat me and my children then. The king won. (He cheated.) Most of the story is set seven years later....