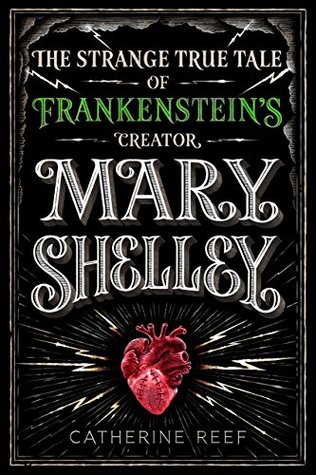 First sentence: Mary Shelley had been dead a year when her son unlocked her portable desk and found the remains of human heart. The heart, he knew, had been his father's. It had rested in the desk for thirty years, unseen and untouched, since the day in 1822 when Mary Shelley tenderly wrapped it in pages of poetry and put it away. Dust and bits of dried-up muscle were all that was left.

Mary Shelley's life was just as tragic as it was unconventional. Her parents were near-celebrities among the intellectually elite. Her mother, Mary Wollstonecraft, was an unconventional woman--an early feminist--who believed in living--experiencing--her life on her own terms despite the frowns of society. She believed in following her heart even if it meant breaking all the rules, even if it led to pain and heartbreak. She brought an illegitimate daughter with her into her marriage with William Godwin (Fanny). Godwin was a like-minded free thinker. At least when he was young with no teenage daughters of his own to raise! It would almost be easier to list everything he was against then to list everything he was for. Anti-tradition, anti-religion, anti-marriage, anti-government, etc. Both Godwin and Wollstonecraft were philosophically-minded writers whose works were published and somewhat applauded and celebrated--at least in certain circles. Mary Godwin's mother died when she was just days old. Godwin who at one time believed he'd never, ever marry now found himself marrying a second time. The woman (Mary Jane Clairmont) he married brought two children (Charles and Jane) from a previous relationship. It was a BLENDED family certainly: Fanny, Charles, Jane, Mary--and then "baby" William.

Her father as I mentioned was well-known in certain circles and their house--their bookshop--had plenty of well-known or soon-to-be well-known authors.

When Mary was a teenager--perhaps fifteen--she met a young would-be poet named Percy Bysshe Shelley. He was married--married with children. But neither one cared about conventions or morality. It was LOVE. The choice she made at sixteen to follow her heart's passion would change her life for better or worse forever and ever. Perhaps even more startling to modern readers is Mary's decision to bring her step-sister, Jane, with her. The two of them would run away with Percy Bysshe Shelley to Europe. It wasn't just a departure from England but from convention. (They'd return to England...but never quite to convention.)

Their lives were packed with DRAMA, DRAMA, AND MORE DRAMA. Mary found herself at the center of it all--an eyewitness to an era. The Romantic poets didn't just approach poetry in a "new," "fresh," "innovative," "genius," way. It was a lifestyle; the poems were a result of how they saw the world around them, what they thought, how they thought. It was thrilling AND disturbing. They wouldn't want it any other way. But would Mary? The book does NOT address that. Perhaps we'll never know the many emotional layers of her heart and mind. (How she felt about her husband, her sister, their many friends that brought chaos and fun into their lives.)

My thoughts: Mary Shelley's life was like a wreck--car, train, ship, take your pick--a devastating crash-boom-bang in many ways. But it makes for a fascinating read. I appreciated that the book was more than just a traditional biography. It also focused on her works. It focuses on Frankenstein, of course, but it also focuses on her other works. She didn't just write one book. She kept writing throughout her life. The book includes how her work(s) were critically received (then and now).  It also focused on relationships. To read of Mary Shelley is to read of the Romantic poets. For better or worse.