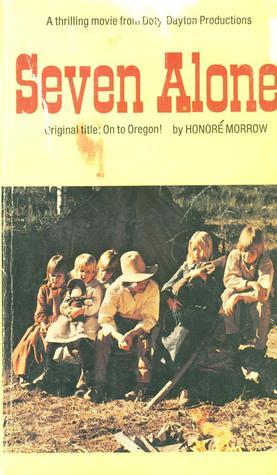 First sentence: This is the story of a great boy pioneer. Perhaps there have been other boy pioneers, thirteen years of age, who were as great as John Sager, but, if so, I have not heard about them.

Premise/plot: Seven Alone is based on the true story of the Sager family. It was originally published as On to Oregon in 1926. It was retitled Seven Alone in the 1970s when a movie adaptation was made.

Henry and Naomi Sager had seven children: John, Francis, Catherine, Elizabeth, Matilda, Louisa, and Henrietta. Their seventh was born on the Oregon Trail. Both parents died on their way west; first the father and then the mother. Before she died she urged her oldest, John, to keep the family together no matter what.

The book chronicles their journey from start to finish. Even if the parents had not died, it would have been a difficult, near-impossible journey for a family to make. The trail was unkind to all alike--men, women, children, babies. There were many, many dangers. No day was without risks and dangers.

The last third of the book has John and his siblings essentially traveling the trail on their own as they seek--in vain, for the most part--to catch up with the wagon train. The wagon train, meanwhile, had broken up into different groups. It became obvious that the family's only hope was to reach the Whitman Mission.

The book--for better or worse--ends happily with the family reaching the Whitmans. (The Whitman Massacre was in November 1847. John and Francis were among those massacred. The other Sager children were among those held captive.)

My thoughts: I remember watching the movie as a child. I honestly can't remember if I read this one as a child. If I'd known--as a child--how the story really ended, I'm sure I would not have read it. If I didn't know, then there's a possibility I read it oblivious to the tragic ending. I did enjoy--then and now--a good pioneer story.

John's story is one of transformation. When the book opens he is a rebellious, selfish, irresponsible brat. But as the journey progresses as he comes to realize the life-and-death nature of the trail, he matures quickly. He becomes courageous, determined, resilient, responsible. His parents' God becomes his God as he comes to rely on Him. When the book opened, John almost rolled his eyes at the daily Bible reading and prayer. But that foundation was not built in vain as John came to see.
© 2019 Becky Laney of Becky's Book Reviews
Posted by Becky at 8:17 AM

This sounds really interesting! I love true stories from around this time (even if they are tragic). I'll have to check it out, great review!

Alyssa, it's a good book. And there's nothing in the book itself to indicate the tragedy that occurs two years later. So readers don't *have* to know what happens next unless they choose to seek out that information elsewhere.