World at War: The Faithful Spy 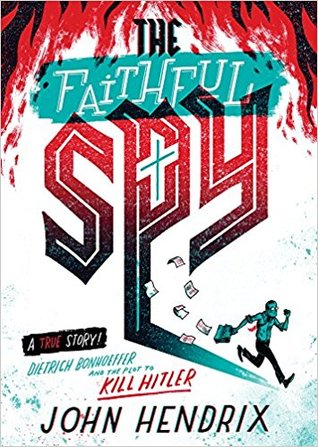 First sentence: This book follows the life of the man Dietrich Bonhoeffer. But it is equally a story of the German resistance. It is a story that often goes untold.

Premise/plot: This biography of Dietrich Bonhoeffer is told in 'graphic novel' format. As hinted in the above 'first sentence' the book balances the bigger picture with the personal.

The Faithful Spy gives a good overview of Hitler's rise to power and the terrors of the Third Reich and an excellent overview of the German Resistance and a handful of attempts to assassinate Adolf Hitler and overthrow the government. The personal story is that of Dietrich Bonhoeffer. From a young age he acted--thought--as a theologian. He grew up to be a pastor at a dangerous time. The "Christian" church was threatened. One had two choices: give in to Hitler's vision of the future and submit to his reign despite/in spite of one's personal beliefs OR resist and defy and stick to one's principles. Or in other words choose between having the Bible as the authority or Hitler. Bonhoeffer saw no choice--one could not in good conscience choose Hitler over Christ. Where Bonhoeffer did have a choice is to stay or to go. Before the war started, Bonhoeffer with help from friends managed to get to America. He could have waited out the war. He could have spoken out against Hitler from afar. He could have written, studied, taught. But after a few weeks in America he decided that he'd made a big mistake. His place was not one of safety in America, he belonged in Germany. Knowing that it very well could cost him everything--his freedom, his life--he returned to Germany. When opportunity came he joined the resistance and became a spy. He was involved to some degree with the failed attempts at assassination. He was eventually imprisoned, tortured, sentenced to death. But Bonhoeffer could not ignore the plight of 'the other.' To live out his beliefs--to put his doctrine in action--meant defying the Nazis and risking it all.

My thoughts: The Faithful Spy is a compelling read. (I read it in two days.) I haven't read much nonfiction written and illustrated in graphic format. The format worked well. I wouldn't say it added drama to the story--how could it? But it paid tribute perhaps to the natural drama of the story.

The book did not shy away from Dietrich Bonhoeffer as a theologian. Not many books published by a non-Christian (aka secular) publisher openly and unashamedly talk God from cover to cover. This one did. Bonhoeffer was a theologian. He was a believer, a student, a teacher, a preacher, a writer. His story could not be told accurately without talking doctrine, faith, God.

Some readers may not embrace the book because of the religious/spiritual aspects of it. But his legacy is intimately connected with his theology. There were many "spies" and many members of the resistance. Many died in Germany as prisoners. Not all were theologians.

There are other books written about his life that focus solely on his story and not on the bigger picture. I think this is an important book.