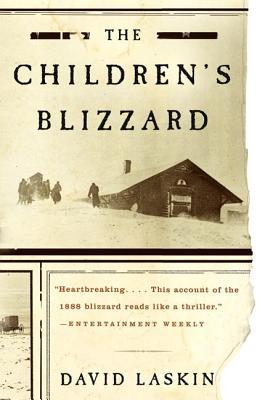 First sentence from the prologue: On January 12, 1888, a blizzrd broke over the center of the North American continent.

First sentence from chapter one: Land, freedom, and hope.

The first two chapters introduce readers to the PEOPLE, the pioneers, we'll be following. Some he traces from Europe--Norway, Ukraine, etc.--all the way to the midwest. These seventy-five pages are key I think to having a personal touch to the story.

The third chapter, "Disturbance" is all science-y and weather-related. What causes cold fronts? What causes blizzards?

The fourth and fifth chapter focuses on the forecasters--or indication officers--the men responsible for observing the weather and passing along messages and warnings from one station to another. Readers learn about Thomas Mayhew Woodruff. We'll be spending a good bit of time with him in the upcoming chapters.

Chapters six through nine cover the storm--often from the perspective of those who were caught up in it. Though not always--sometimes we follow those who are WAITING for a loved one and worried about their safety. This storm was COSTLY, deadly even.

Chapters ten through twelve are about the aftermath of the storm.

My thoughts: I found this one to be a super compelling read. It was INTENSE. It was dramatic. I believe it to be well-researched. There are many, many sources listed--and the sources are listed for each chapter. I found the personal touches to this one to be fascinating--history is more alive--more "real" when there are names attached to stories and events. It's impossible not to care. The book is packed with information. I am THANKFUL for the modern advancements made in meteorology.

Sounds fascinating. I also love historical stories like this about specific event. I'm putting it on my GR list but...since we're getting reading to have an arctic air event here in southern Indiana in the next couple of days I will wait to read it in milder weather.
Great review.

Debbie V., sounds like a good plan :) I read it under a quilt and still found myself COLD for hours after reading it.