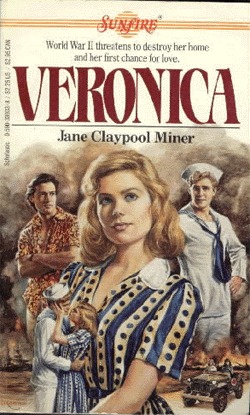 First sentence: The party looked just as boring as Veronica feared, and she planned her retreat the minute she entered the room.

Premise/plot: Veronica is set in Hawaii in 1941. The novel opens a few months before the bombing of Pearl Harbor. Veronica Stewart is our sixteen year old heroine. Throughout the book she'll be courted by two young men: a slightly older sailor, Phillip, and a fellow classmate, Mike. Her snobbish mother disapproves of both. She disapproves of Mike because he's Hawaiian. She disapproves of Phillip because he's a sailor--not an officer in the Navy. (Veronica's father is an officer in the Navy). Both men are dying of love for her--or so they claim. Veronica realizes sixteen is too young to go steady or become engaged.

Veronica is young and carefree at the start of the novel. She's not had to grow up quickly by being weighed down by adult-size worries. But the war does change that--and she adapts well to the situation. She welcomes responsibilities and grows into a lovely young woman.


I grew up reading the Sunfire romance novels. I did. Some I reread many, many times. Some I just read once or twice. I loved the sweetness of them. They are definitely quick escapist reads. Though the subject is war, this one isn't super-serious--not like The Diary of Anne Frank or The Book Thief.

Each book does feature a love triangle. Usually readers can guess which hero is THE ONE very early on. If not, there's always the cheater-pants way to tell--by looking at the end first.

The original readers of Veronica would have been born circa 1972-1978.

Dear Scholastic:
If I thought begging would do any good, I would plead with you to republish the Sunfire romance series originally published in the 1980s. The "name" books were my favorite-and-best books from my middle years--my first introduction to the wonderful genre of historical romance. It's a love that's still going strong, by the way. I know the Sunfire books don't contain vampires, werewolves, fairies, or demons. But why should romance novels contain such in the first place. If they were worth publishing in the first place--which they so clearly were--they are worth republishing.

I have given it a lot of thought. I have. And I think it would be wonderful if the books were republished as e-books for the same price as the original paperback books were released. Granted, I would love to see PRINT copies as well. But I imagine that they would cost more than the lovely $2.95 of the originals! But for an e-book, the thought is IT'S WORTH EVERY PENNY.