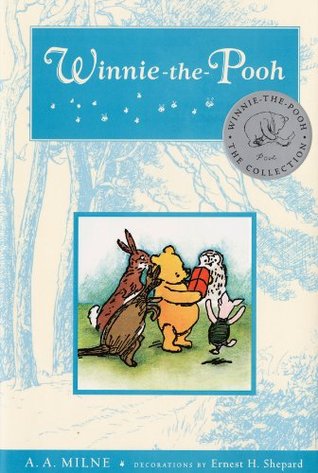 First sentence: Here is Edward Bear, coming downstairs now, bump, bump, bump, on the back of his head, behind Christopher Robin. It is, as far as he knows, the only way of coming downstairs, but sometimes he feels that there really is another way, if only he could stop bumping for a moment and think of it. And then he feels that perhaps there isn't. Anyhow, here he is at the bottom, and ready to be introduced to you. Winnie-the-Pooh.


"I think the bees suspect something!" "What sort of thing?" "I don't know. But something tells me that they're suspicious!" "Perhaps they think that you're after their honey." "It may be that. You never can tell with bees." (19)

"I think," said Christopher Robin, "that we ought to eat all our Provisions now, so that we shan't have so much to carry." "Eat all our what?" said Pooh. "All that we've brought," said Piglet, getting to work. "That's a good idea," said Pooh, and he got to work too. "Have you all got something?" asked Christopher Robin with his mouth full. "All except me," said Eeyore. "As usual." He looked round at them in his melancholy way. "I suppose none of you are sitting on a thistle by any chance?" "I believe I am," said Pooh. "Ow!" He got up, and looked behind him. "Yes, I was. I thought so." "Thank you, Pooh. If you've quite finished with it." He moved across to Pooh's place, and began to eat. "It don't do them any Good, you know, sitting on them," he went on, as he looked up munching. "Takes all the Life out of them. Remember that another time, all of you. A little Consideration, a little Thought for Others, makes all the difference." (113)

"When you wake up in the morning, Pooh," said Piglet at last, "what's the first thing you say to yourself?" "What's for breakfast?" said Pooh. "What do you say, Piglet?" "I say, I wonder what's going to happen exciting today?" said Piglet. Pooh nodded thoughfully. "It's the same thing," he said. (147-48)

I also love Pooh, and his example in slowing down to smell the roses and appreciate the little things really being the big things. In fact, like you I love the whole cast of characters at the 100 Acre Wood, and what they can show us :D