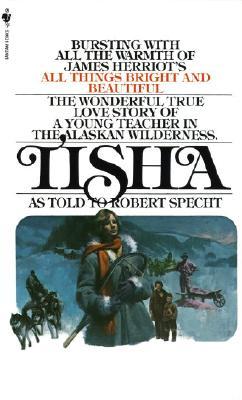 Tisha: The Wonderful True Love Story of a Young Teacher in the Alaskan Wilderness. As told to Robert Specht. 1976. 342 pages. [Source: Bought]

First sentence: I've lived in the Forty Mile country of Alaska for a long time, but even now, every so often when I'm out rock-hunting or looking for fossils, I get lost.

Premise/plot: This novel is based on the life of a real woman, Anne Hobbs, who in 1927 arrived in Chicken, Alaska, as a teacher. Anne, originally from Colorado, was the daughter of a miner. Though young and lacking perhaps in great life experiences, she felt ready--mostly--to tackle anything and everything. Challenges and obstacles there would be PLENTY. Especially when she found herself falling in love with a half-breed, Fred Purdy, in a town with many, many biases. (To clarify, that is how he's referred to in the book by those living in the community at the time.) Especially when she found herself essentially adopting two Indian children after their mother's death.

"Before you leave this office I'd like to give you a bit of advice. I have the feeling that you are a pretty tolerant young lady--young enough to be open to new ideas. Where you're going you'll find that most people are not. They have their own code and they don't take to anybody who tries to go against that code or change it. In short, I hope you're not going into this job with, well...shall I say a missionary zeal?" (66)

My thoughts: I really LOVED this one. I found it at my local charity bookshop. It was so worth the $1 I spent. I would recommend it to anyone who enjoys historical fiction, romance, or drama. The drama not only comes from the community and tense relationships within Chicken but also the natural environment. Tisha is best read under warm blankets or with a cup of hot tea in hand.

Anne Hobb's heart was BIG and she was STUBBORN in all the right ways. I love how she welcomed everyone--even the town outcasts into her heart and home. 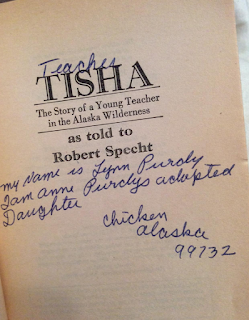 I read this book a couple of times, years ago! I loved it! It's actually still sitting on my shelf. Maybe time for a re-read. Thanks for reminding me about this little treasure.