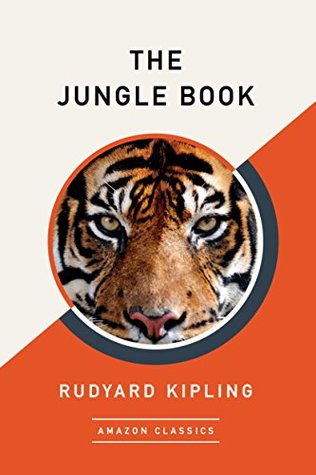 First sentence: It was seven o’clock of a very warm evening in the Seeonee hills when Father Wolf woke up from his day’s rest, scratched himself, yawned, and spread out his paws one after the other to get rid of the sleepy feeling in their tips.


Premise/plot: The Jungle Book is a collection of seven short stories and seven poems by Rudyard Kipling. The stories are: "Mowgli's Brothers," "Kaa's Hunting," "Tiger, Tiger," "The White Seal," "Rikki-Tikki-Tavi," "Toomai of the Elephants," and "Her Majesty's Servants." The poems are: "Hunting Song of the Seeonee Pack," "Road Song of the Bandar-Log," "Mowgli's Song," "Lukannon," "Darzee's Chaunt," "Shiv and the Grasshopper," and "Parade Song of the Camp Animals."

A few of the stories do go together. These are probably the stories you'll remember as being THE JUNGLE BOOK. Stories featuring Mowgli, Bagheera, Baloo, Kaa, Shere Khan, etc. But these stories are just a fraction of the book.

The best non-connected story is Rikki-Tikki-Tavi, a story about a brave mongoose's showdown with cobra snakes.

My thoughts: I really did enjoy the stories featuring Mowgli and friends. If ALL the stories were about these characters, no doubt I would want to reread it every few years and spend more time with my friends. But the Mowgli stories only make up THREE out of the seven. (Rikki-Tikki-Tavi is EXCELLENT. So that makes FOUR out of the seven worth reading.) The other stories range from boring to extremely boring. I got no pleasure, no joy, from reading the other stories. If I do ever reread this one, I will know to SKIP, SKIP, SKIP.

I was tempted to read this after giving up as a child. But I didn't realise it was short stories. Disappointing. I thought it was a novel. I recently watched Mowgli on Netflix it was good. Not sure about reading this now

Jen, I would recommend Into the Jungle: Stories for Mowgli. It was WONDERFUL. The characterization is great and it's a real celebration of story telling. I felt it was true to the characters of the book and there wasn't a dull moment.