15. The Case of the Careless Kitten 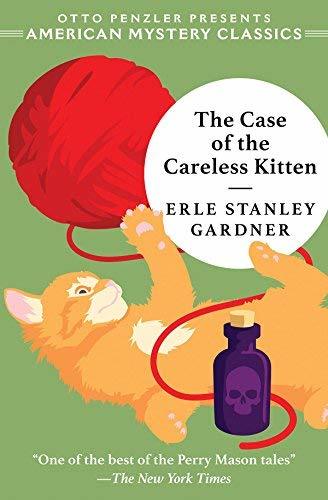 First sentence: THE KITTEN’S eyes, weaving back and forth, followed the ball of crumpled paper that Helen Kendal was waving high above the arm of the chair. The kitten was named Amber Eyes because of those yellow eyes. Helen liked to watch them.

Premise/plot: Helen Kendal's kitten, Amber Eyes, is poisoned (but survives) shortly after she receives a phone call from her missing (long thought dead) uncle. Her uncle, Frank Shore, wants her to meet with the lawyer, Perry Mason, and go to a super-shady hotel later that evening. He's arranged for someone to meet them (just them, only them) and take them to a second location where he'll be waiting. She's not to tell anyone--especially her aunt, Matilda. (She ends up talking with her (other) uncle Gerald). The meet-up does NOT go as planned. They find a NOTE not a man. And the man they were supposed to meet up with (to find the uncle) is found DEAD. And so it begins...

My thoughts: I do love Perry Mason. I am more familiar with the television series than the actual novels the show is based upon. However, I do enjoy both. It's been years since I last read a Perry Mason novel. (Or it could have been 2020-ish. Which feels like years ago).

How does this one compare to other Perry Mason novels? Well, I can't compare it to each and every one, but, I'll do my best to compare it with your typical Mason mystery.

First, the KITTEN, Amber Eyes, truly steals the show. This kitten stars in several scenes of the book. Often her antics make for the best bits of dialogue. And literally, Mason solves the case because of the kitten! She's key to putting all the pieces together...

Second, this Perry Mason novel was written and published in 1942. One of the suspects (though not high up on the suspects list) is a "houseboy" who works for Aunt Matilda. She claims--and he claims--that he is Korean, not Japanese. Everyone--including Mason and company--are suspicious of him. Is he lying about being Korean? Is he Japanese? Is he loyal to Japan? Is he a traitor to the United States? If this was written in ANY other year/decade, it would feel definitely cringe and super-regrettable. (I'm not saying it is justifiable. Just that the context makes sense of WHY.) There are probably half a dozen scenes where characters slur his race/ethnicity (in general). Again, not justifying the behavior, but during the war, the propaganda machine was going full force. And even before the war, Americans were VERY divided on if ANYONE of Asian descent should be allowed to emigrate. There were strict immigration laws. It was UGLY. I highly recommend Days of Infamy by Lawrence Goldstone. The novel captures a moment in American history. Seen in light of actual history, I think you can understand how/why this bias, this prejudice makes its way into a mystery novel (set in California). This could be a good opportunity to take a moment or two to reflect and dig a little deeper.

Third, while there is a BIG reveal, it takes place OUTSIDE the courtroom. Perry Mason has had enough. Like he's ALL DONE. He does not solve the D.A.'s case for him. He clears his client of the so-called crime (it's complicated), but does NOT fill in the blanks for the prosecution.

Fourth, the courtroom case we do see is NOT the murder case. But I hate to spoil who his client is and what the charge is...

But Perry Mason had a mind which was only content when it was detouring the technicalities of legal red tape. He not only regarded each case as a venture studded with excitement, but became impatient with the delays of routine procedure. More and more, as his practice developed, he became interested in personalities. More and more, his methods became dazzlingly brilliant, increasingly dangerous, and highly unorthodox.

“A cat usually picks at its food. That kitten must have been terribly hungry to gulp down those balls of meat.” “This kitten was just careless, I guess. Hurry up.” “Very careless,” nodded Della. “I think when I open the file for this case I’ll call it ‘The Case of the Careless Kitten.’ ”
“It’s high time for citizens to wake up to the fact that it isn’t a question of whether a man is guilty or innocent, but whether his guilt or innocence can be proved under a procedure which leaves in the citizen the legal rights to which he is entitled under a constitutional government.
Hamilton Burger said to the Court, “I am asking leading questions on some of these points which are not disputed, but which I want to get before the jury.” “No objection,” Mason said. “What did your uncle say to you over the telephone?” “Objected to,” Mason said, “as hearsay. Incompetent, irrelevant, and immaterial.”
“I’m going out to buy a cat so I can study him and learn about some of the important facts of life.”