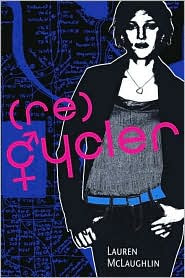 I hope you know what you're doing, sweetie.

This is the sequel to Cycler. I had some issues with the first book, I admit. So what made me pick this one up? Maybe it's just the kind of reader I am. I give second chances. I can't help myself. Did I change my mind about these characters after the second book? Yes and no. First, the little things that irritated me in the first book didn't irritate me as much in this second one. (Yes, I noticed a lot of mal's and deeply's. Though not as many.) So I did think the second one was better.

What is this one about? To put it simply, it's about a young woman who transitions several days a month into a guy. Yes, instead of having her period, her body goes from all female to all male. (The process was painfully described to readers in the first book.) Obviously, the male persona, (the Jack to her Jill) has different priorities. He's in love with Jill's best friend, Ramie. (Jill is in love with a guy, just so you know. And this guy is someone that Jack doesn't like at all. He doesn't like having memories of being intimate with a guy. Because Jill has spent her life repressing Jack, she doesn't have clear memories from Jack, of being intimate with her best friend.) Jill and her two friends, Ramie and Tommy, have graduated from high school. Ramie wants Jack (and subsequently Jill) to go to New York with her. Tommy wants Jill (and subsequently Jack) to go on a road trip with him over the summer. Who will s/he choose?

This book has an interesting premise. A strange premise true, but one with some potential. I still have some issues with this one. Not as many as the first one. I did enjoy it more than that. But this book asks you to suspend your disbelief quite a bit. Okay, more than a bit.

One issue that I had with the book, one thing that made it a bumpy ride (for me) is that it is told in alternating chapters. Which makes sense, in a way. Since Jack is only there a few days a month, and Jill is there the rest of the time, you'd expect to find Jill doing more, saying more, feeling more. But that's not the case. Perhaps this says more about me than about the book itself, but I find the Jack portions stronger than the Jill ones. Yes, Jill has a few moments in this one. But mostly this is Jack discovering Jack. And learning that just because he's been a victim (in a way, if being repressed and locked up makes you a victim) doesn't mean that he has to stay one. He learns a lot about himself, about life in the larger world, and about love. Ramie whom he considers his one-and-only reason to exist, isn't perfect. And Jack realizes that he doesn't know much if anything about love and relationships. Yes, he has Jill's memories. But he doesn't really understand women. He's a guy even if he doesn't know how all guys act.

Have you read either of these? What did you think?

© Becky Laney of Becky's Book Reviews
Posted by Becky at 8:34 AM

I haven't read it, but reading the summery alone is enough to make me squirm. I don't even like using shampoo with a man scent. I can't imagine how I'd feel losing the girls and growing some other little dangly bits to replace them. -.-

I'm still super intrigued by this series...I put the first one on my paperback swap list and I'll definitely be checking it out once it comes in. I just finished reading Amy Bloom's Normal which is a non-fic book about transexuals, cross-dressers and people who are intersex, so this sounds like something I'd like to read right now!

I've never read something like this before...I definitely want to pick it up to read it now. It's not your average run-of-the-mill teen drama. I'll surely check this out now, thanks. ^_^