The Tudor Rose: A Novel of Elizabeth of York 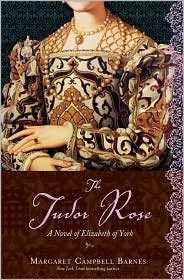 A long-drawn sigh of feminine ecstasy filled the room as the white velvet was lifted from its wrappings.

This is my third Margaret Campbell Barnes, and I absolutely loved it. Okay, maybe absolutely is putting it a little too strongly. After all, I'm not saying this is the most wonderful, amazing book ever written. What is it about? Elizabeth of York? Who is she? She's the daughter of Edward the IV. The sister of the two (supposedly) murdered princes. The niece of Richard III. The wife of Henry VII. The mother of Henry VIII. (You can read my thoughts on Shakespeare's Richard III.) This one novel spans many decades. We first see Elizabeth as a young woman, a girl preparing for a wedding, the "feminine sighs of ecstasy" are nothing improper, rather her reaction to trying on her wedding gown. (The engagement falls through, however.) We see her taking delight in being a daughter, a sister. We see a brief glimpse of the before. Before what? Well, before everything fell apart and then some. Before her father dies. Before her younger brother becomes the king. Before her brothers lives are at risk from someone very close at hand.

This story could not be told without focusing in on the politics. What things people will do (and say) for a chance at absolute power and control. The novel reveals a personal story. How these power plays, these political manipulations can control one's life. Because of who she is--whose daughter she is--many things are out of her control. It's not a matter of who she loves, who she desires, what she wants, what she needs, what kind of life she'd like to have. Reading this one made me see the human side of history.

The book was compelling. In fact, I had a hard time putting it down. I didn't expect that. I didn't expect a must-read feeling. I didn't expect to find such an instant connection with these characters. I didn't expect such a strong reaction. I find it interesting that even though I knew what would happen, it was so suspenseful, that I had to keep reading. I didn't find it boring...at all. So I would definitely recommend this one to fans of historical fiction. If you haven't discovered Margaret Campbell Barnes, you should really give her a try.

I dont read a great deal of historical fiction, but this intrigues me. Elizabeth of York was a fascinating woman who was beloved by everyone who knew her and mourned greatly after her death. I would be very interested to see how historical accurate this novel is. Glad you liked it!

Great review! I'm fascinated by this period of history. I can't wait to read this book myself!

I love historical fiction and I love this time period-I am so going to have read this series. Thanks for introducing this author to me!

I enjoy good historical fiction very much--thanks for your review. I will look for this book.