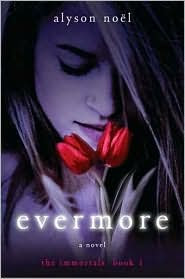 Can you guess what kind of book this is based on the cover? What do those red tulips mean?

Ever Bloom, our sixteen-year-old heroine, has a gift--secret of course like most paranormal gifts are. She hasn't always had this gift--the gift of seeing people's auras, of reading their thoughts with just the simplest, barest trace of a touch--but since her near death experience, well, she's different. (Her parents, her sister, her dog--all died in a car crash.) Now, Ever is living with her aunt. And she has ever material reason to be happy. But guilt haunts her--well, guilt and her little sister. Yes, her ghost-of-a-sister still pops up ready to chat and giggle. She's got two friends to chat with as well. One, Haven, an attention-hungry twelve-step addict. The other, Miles, a gay sidekick who always knows just what to say.

What is Evermore about? Well, it's focus is on the strange new boy who comes to town. His name is Damen Auguste. And he's the only person whose thoughts (and aura) she can't read. He's her silence. He is also oh-so-dreamy. All the girls (and some of the guys) think he is ever-so-hot. But not Ever. Well, at least that's what Ever claims. She's not interested in having a boyfriend. Do you believe her? Or are you a skeptic like Haven?

Who is Damen interested in? That's a good question...since judging purely on appearances...he's an ultimate player. But there is only one girl he's giving red tulips to. And that's Ever. Is that enough for her?

Some of you may be wondering how much does Ever whines? Well, less than Bella. But she's not whine free.

Here are a few of my favorite bits:

"Haven is what you'd call an anonymous group addict. In the short time I'd known her, she's attended twelve-step meetings for alcoholics, narcotics, codependents, debtors, gamblers, cyber addicts, nicotine junkies, social phobics, pack rats, and vulgarity lovers. Though as far as I know, today is her first one for overeaters. But then again, at five foot one with the slim, lithe body of a music box ballerina, Haven is definitely not an overeater. She's also not an alcoholic, a debtor, a gambler, or any of those other things. She's just terminally ignored by her self-involved parents, which makes her seek love and approval from just about anywhere she can get it.
Like with the whole goth thing. It's not that she's really all that into it, which is pretty obvious by the way she always skips instead of skulks, and how Joy Division posters hang on the pastel pink walls of her not-so-long ago ballerina phase (that came shortly after her J. Crew catalog preppy phase.)
Haven's just learned that the quickest way to stand out in a town full of Juicy-clad blondes is to dress like the Princess of Darkness. (31-32)

I see dead people. All the time. On the street, at the beach, in the malls, in restaurants, wandering the hallways at school, standing in line at the post office, waiting in the doctor's office, though never at the dentist. But unlike the ghosts you see on TV and in movies, they don't bother me, they don't want my help, they don't stop and chat. The most they ever do is smile and wave when they realize they've been seen. Like most people, they like being seen. (47)

"I know what it's like to lose the people you love," he whispers, reaching across the table and placing his hand over mine, infusing me with a feeling so good, so warm, so calm, and so safe--I close my eyes and allow it. Allow myself to enjoy the peace of it. Grateful to hear what he says not what he thinks. Like an average girl--with a much better than average boy. (49)

If I thought his voice was amazing with the way it envelopes me in silence, if I thought his touch was incredible with the way it awakens my skin, well, the way he kisses is otherworldly. And even though I'm no expert, having only kissed a few guys before, I'm still willing to bet that a kiss like this, a kiss this complete and transcendent, is a once-in-a-lifetime thing. (82)

What did I think of this one? I'm undecided. Part of me thinks that as light entertainment, it does the job just fine. I think if I was fourteen or fifteen, I probably would think it much more entertaining that I do now. (In some ways, it's clean enough that it could even go more towards middle school. A Twilight-esque book that serves a definite need for readers.) Is it original enough? Yes and no. I think some readers find originality overrated. They just don't care if it's all been done before. They want a book that fits a formula, a mold, that they like. In this case, it's the incredible paranormalness of it, this true-love-for-eternity theme. I think this one *may* be a book that teens love more than adults. But that isn't a bad thing. I think any book that gets people reading can be a good book.

© Becky Laney of Becky's Book Reviews
Posted by Becky at 8:07 AM

You're probably right. I might have liked this book more if I was a young teen. But I'd have to have been a teen who didn't read much, or I still would have been put off by the blatant rip-offs of other series. The mind-reading thing was done in the Twilight novels and in the Sookie Stackhouse books, and the plot of Evermore was pretty much the same as that of Twilight. I guess there are some people who like reading the same story over and over again, as long as there's a hot guy to drool over.

Getting people reading is a good thing... but I question the real value of it if all they ever want to read is the same basic story with different covers.

Nice review, though. You have some nice insights.

Yes! What is up with all the tulips these days!? :)

I had this book out from the library but didn't have time to read it! I actually don't think I am going to bother getting it back, though.

Your review is exactly how I felt about the book. It was fine, but either I'm burned out on this type of book or it's limited to a younger crowd.