Heart of a Shepherd (MG) 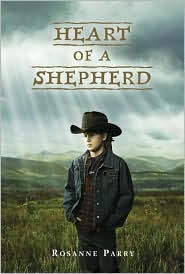 Grandpa frowns when he plays chess, like he does when he prays.

Our narrator is Brother. (If your name was Ignatius, you might prefer the nickname Brother too.) As he says in the first chapter, "Guess they ran out of all the good saints by the time they got to me. Lots of things ran out by the time they got to me. My brother Frank says it could be worse--they could have picked Augustine or Cyril--but honest, I wouldn't have minded being Gus, or even Cy. But Ignatius pretty much shortens to "Ig" or "Natius." That's not even a good name for a cow. Heck, I wouldn't name a pig either one" (8).

He comes from a line of ranchers and soldiers. Big men, strong men, manly men. Unfortunately, for Brother, his father's reserve unit has been called to Iraq. And his older brothers are all in college. So it's just him, grandpa, and grandma there on the ranch. (Well, along with a few hired hands.) Can he handle it? Does he have what it takes to be a rancher? A real rancher? Can he be responsible? Can he be a man?

Cows. Sheep. Horses. You'd think I wouldn't like this one. But you'd be wrong. I ended up loving this one because it has a lot of heart. I'm talking meaning-of-life type heart and soul here. Can Brother find his place, find his purpose? Should he follow in his father's footsteps? His grandfather's?

I loved this one for many different reasons. It was thoughtful, for one thing. It portrayed faith really, really well. Probably one of the best examples of faith-in-fiction that I can think of. (A Road to Paris also comes to mind in this category.) It was also relevant. It dealt with how a young person might react to having a parent go to war. Since this town had a lot of parents-as-soldiers, there is a whole community of kids, of families worrying and waiting and hoping. It's not often you get modern-day stories about war. (Not nearly as popular as books set during World War II.) But above all else, I think the book does justice to relationships, of family dynamics. I think the friendship between grandfather-and-grandson was just awesome. I love, love, loved this aspect of the novel.

© Becky Laney of Becky's Book Reviews
Posted by Becky at 8:24 AM