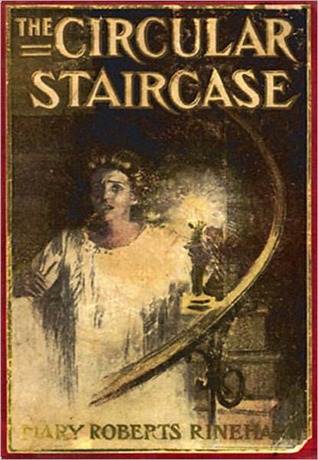 First sentence: This is the story of how a middle-aged spinster lost her mind, deserted her domestic gods in the city, took a furnished house for the summer out of town, and found herself involved in one of those mysterious crimes that keep our newspapers and detective agencies happy and prosperous.

Premise/plot: The novel opens with Rachel Innes, "Aunt Ray," deciding to rent a large country house in the summer to share with her niece, Gertrude, and nephew, Halsey. Both are old enough to have courtship and marriage on their minds. Gertrude being madly in love with a Mr. Bailey, and Halsey being mad for a Miss Louise Armstrong. (It is actually the Armstrong's home which they are renting for the summer. Though Aunt Ray isn't aware that her nephew is in love with the wealthy young daughter. The Armstrongs are supposed to be vacationing in California for the summer.) Problems start almost immediately. Faces in the window. Strange noises in the night. Scratches on the staircase that weren't there before. Day by day, night by night it just keeps getting creepier. It's a day or two before the first dead body shows up....

Liddy is the only "servant" from the city accompanying Miss Innes. Servants are hired in the country--and without references too--Miss Innes is so desperate for help. It seems servants--young, old, male and female--are easily frightened by murder and burglary.

My thoughts: I wanted to love this one. I didn't. I liked it here and there. I couldn't decide if Miss Innes was for real. If she was supposed to be taken seriously or not. There were times in her narration where she just seemed to be oh-so-blind to the humanity of those around her. For example,


There was no laudanum, and Liddy made a terrible fuss when I proposed carbolic acid, just because I had put too much on the cotton once and burned her mouth. I’m sure it never did her any permanent harm; indeed, the doctor said afterward that living on liquid diet had been a splendid rest for her stomach. But she would have none of the acid, and she kept me awake groaning, so at last I got up and went to Gertrude’s door. To my surprise, it was locked.


Halsey bought a car, of course, and I learned how to tie over my bonnet a gray baize veil, and, after a time, never to stop to look at the dogs one has run down. People are apt to be so unpleasant about their dogs.

If readers were supposed to find her charming, delightful, lovable, a woman of great intelligence and wit...I wasn't ready to accept her as such.

As for the mystery, I found it very confusing. I didn't find the narration straight-forward enough to help with the clues. Everything was cleared up by the end of the book. I loved, loved, loved the first sentence. The rest, not so much.