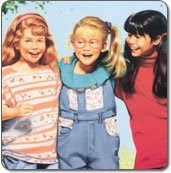 The Babysitters Club. I admit it. I read them as a child. I can't say I read all 131 books and 12 Super Specials, but I read more than a few. I believe I grew out of them by the early to mid-thirties. (Not my age. The number in the series.) The first book in the series, Kristy's Great Idea, was published in August of 1986. When I discovered the series, the first three or four were already published. I believe I bought them all at the same time. (I think. It's been a while. But I do remember that I had to wait after that for each new release.) Why the emphasis on how old it is? Because it says something both about the book and about me.

The graphic novel--for me--just didn't do this book justice. I'm biased. I'm not really "into" graphic novels. I'm not. I've read most of the Babymouse and I love them. I do. But that is really the exception. The others? I look at the covers. I might open one now and then. But overall, I'm just not that interested. Why did I pick this one up? The Young Adult Reading challenge (host Shady Glade) has a requirement of a graphic novel. And I wanted to reread Kristy's Great Idea for the Heart of A Child challenge. (And the actual novel-novel was checked out.)

For those who haven't read any of the novels and have no idea what's going on (if you're patient enough to get this far), The Babysitters Club is started by Kristy. It is her "great idea." She teams up with some of her closest friends, Claudia and Mary Anne, and invites a new girl into the club as well, Stacey. The Club is to help parents find a babysitter in one quick and easy call. One call, 4 sitters at their disposal. The series alternates narrators between each member of the club. (And more than four do eventually join.)

I haven't read the book in at least fifteen years. But a lot has changed in fifteen years. The book has no computers, no internet, no email, no cell phones. And things like nail polish and make-up are "forbidden" to girls their age (seventh grade, I believe) and having a phone in one's bedroom (or one's own phone line in general) is a complete novelty. Claudia's extra-extra cool because she does. But the references to Rainbow Brite and G.I. Joe date the novel further. (While you could argue that G.I. Joe is relatively timeless, they're certainly not the HUGE thing they were in 1986. I remember watching the end credits to the cartoon show every week day. I was always early for the next show. Now I can't quite remember what that show was.)

I don't know if the lack of technology would bother modern readers or not. But not having it certainly makes starting the club more work for the kids. And that's not necessarily a bad thing. It gets them thinking; it gets them into being creative.

I was surprised by how much I remembered. The small things. The little details. The snippets of dialogue. Each character's pet peeves. The mundaneness of siblings' names even. This is neither a good or bad thing. Just something to think about. I wonder how much essentially useless knowledge is stored in my brain??? 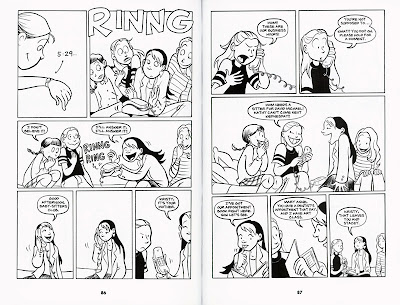