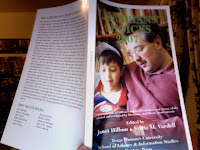 I *probably* should have written about this earlier in the day. But I'm a night owl. I do my best thinking at night. (At least I *think* I do. I don't have anyone to confirm my hypothesis.)

Anyway, yesterday (Monday) was either the last day or the first day depending on your point of view. We got our Librarians Choices 2007 books. (Fresh from the printer!) I believe that they will be available to purchase ($5) at the upcoming Texas Librarians Association meeting. That's what I heard last night anyway. (The 2007 Reviewers were: Julie Brinker (she's the Julie I refer to so often), Mary D. Buckalo, Jane Claes, Susie Demarest, Cay Geisler, Janet Hilbun, Tammy Korns, Becky Laney, Rebecca McKee, Sylvia Vardell, and Donna Woody.) So we were technically celebrating last year's achievements. 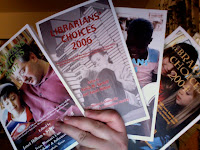 But, of course, we were already thinking ahead for the next year: Librarians Choices 2008! It is always so exciting to begin again. They'll be a few new reviewers joining us next year which is exciting. (I love meeting new folks who love books as much as I do!!!) And I love the fact that so many of these reviewers have become old friends now that we've been doing this so long. As I've mentioned before, I've participated in all but the first group. (2004, 2005, 2006, 2007) So this will be the fifth year for me, but technically the sixth year for the project. Our next meeting will be in April.

Here are the books I've borrowed.

Three picture books: A Song for Cambodia by Michelle Lord; Little Red Cap by Lisbeth Zwerger; You Can Be My Friend by Lauren Child*.

I'm proud of myself for not borrowing more. Though I really should be slapped on the wrists for taking even those since I have so many books of my own that I need to be reading.

*Technically I know that this one won't stand a chance because it's not actually by Lauren Child. Just based on Lauren Child's characters. But I love Charlie and Lola so that I had to grab it!
Posted by Becky at 10:01 PM