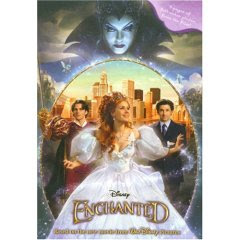 Jones, Jasmine. 2007. Enchanted. Based on the screen play by Bill Kelly.

If you've read my blog in the last week, you couldn't have failed to notice my current obsession with all things Enchanted. The movie and the soundtrack are wonderful. I just love them. So the review of the book, Enchanted, is not going to reflect on my feelings of those items--both must haves in my opinion.

What can I say about this junior novel? Well, when the author isn't even mentioned on the book cover or the spine, it might be telling you something. This novelization based on the movie is probably not better or worse than any other movie novelization you might have encountered in the past.

What is good about the book? It has most (if not all) of your favorite lines from the movie. It is based on the script after all. There are a *few* differences. For example, the scene where Nancy first meets the towel-cladded Giselle is abbreviated. The argument between Nancy and Robert (about grown-up girl bonding time and crowd control) perhaps not being considered appropriate enough or important enough for this target-age group. But it works both ways. The book has a snippet of dialogue that I can't remember from the movie (I've seen it about five times now). When the two have made plans to go to the King and Queen's ball. Edward asks what he is to do in the meantime--while she's getting ready, going shopping, etc. She tells him to go and try something magical--a shower.

But if I'm being honest, the book is almost by default going to be lacking the charm and magic and grace of the movie. Yes, the movie has great lines--snippets of dialogue--the story itself is great. But the real charm and beauty comes from the music and the imagery. Reading the descriptions of the imagery is fine, but actually seeing and hearing it is always going to be better.

That being said, it isn't an expensive book. And if I was in the target age-range, I'd probably be loving it. I doubt that this book is going to disappoint young readers in the 7 to 9 age range. But adult readers (if there are any besides myself) might be wishing it had a bit something more to take you above and beyond the movie. Something to take you inside the heads and hearts of these characters.

And here's something to think about. The book did release several months prior to the release of Enchanted in theatres. So there very well could have been some (who can guess how many???) readers who encountered Giselle and Robert and Edward and Pip through the book first while counting down the days until the movie opened.
Posted by Becky at 6:08 PM

I just bought the movie today, but am waiting for an opportune time to surprise the kids with it. We'll see what happens! :)

it seems that if the book is written first and then a movie made of it, that it is always said the book is better. But when they make a movie and then write the book..the book is surely the lesser of the two.

I am looking forward to getting the movie!

I am rarely tempted to pick up book adaptations of films. They are by nature...or should be...weaker than the film. That isn't always the case though. I looked forever to find a copy of the novelization of Labyrinth and I really enjoyed it when I finally found and read it last year. It answered a few questions which made it worth the time reading it.