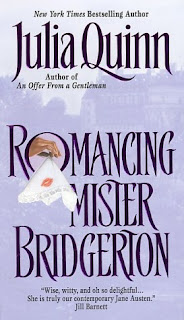 Romancing Mister Bridgerton is my favorite and best. It is the fourth in a series of Regency romance novels by Julia Quinn focusing on the eight Bridgerton siblings: Anthony, Benedict, Colin, Daphne, Eloise, Francesca, Gregory, and Hyacinth. The fourth novel focuses on Colin Bridgerton. If you've read any of the previous novels you know that Colin is the favorite of many--both in and out of the family. His charm, his wit, his good nature make him quite the natural choice. (The other novels are The Duke and I, The Viscount Who Loved Me, and An Offer From a Gentleman. All feature glimpses of Colin.)

Penelope Featherington is not alone in her admiration of Colin Bridgerton. But she might be voted the least likely to marry a Bridgerton. In all honesty, she'd probably be voted least likely to marry anyone. Whether seventeen or twenty-eight, Penelope has always been Penelope. On the outside looking in, always waiting and watching and hoping all the while knowing that this spinsterhood is her destiny.

This is not our first introduction to Penelope. She has appeared in most of the other Bridgerton novels as well. (She has quite a memorable scene or two in An Offer From A Gentleman. And she played an important role in The Duke and I as well. I can't remember if she's got any lines in The Viscount Who Loved Me or not.)

Let me say now that this novel had me at hello.

On the sixth of April, in the year of 1812--precisely two days before her sixteenth birthday--Penelope Featherington fell in love.
It was, in a word, thrilling. The world shook. Her heart leaped. The moment was breathtaking. And, she was able to tell herself with some satisfaction, the man in question--one Colin Bridgerton--felt the same way.
Oh, not the love part. He certainly didn't fall in love with her in 1812, (and not in 1813, 1814, 1815, or--oh, blast, not in all the years 1816-1822, either, and certainly not in 1823, when he was out of the country the whole time anyway). But his earth shook, his heart leaped, and Penelope knew without a shadow of a doubt that his breath was taken away as well. For a good ten seconds.
Falling off a horse tended to do that to a man.

The book opens in 1824. Penelope has had plenty of years to dream and dream and dream about Colin from afar. As the best friend of Eloise, Penelope has long been a regular of the Bridgerton household. For teas. For visits. For parties and dances and balls. There's not a week that goes by where she hasn't spent several hours in the company of one or more Bridgertons. Colin does know she exists. He just doesn't see her in that way. He's not alone, no man thus far in her life has seen her in that way.

Besides being friends with the Bridgerton clan, Penelope has a rather chummy relationship with Lady Danbury, a woman in her seventies who's not afraid to speak her mind when she gets the notion. And lately Lady Danbury has been struck with the notion that Penelope is quite wonderful; unfortunately, not many people are aware of the fact of just how amazingly wonderful she is. But if Lady Danbury has her way, Penelope will soon have her day to shine.

It all starts with a dare, a bet. At a gathering (ball, party, dance), Lady Danbury startles everyone with a proclamation. Wouldn't it be fun to solve the riddle of who this Lady Whistledown really is? She offers a monetary reward. Solve the mystery and win the money. Lady Whistledown, for those unfamiliar with the novels or unfamiliar with my earlier reviews this week, writes a gossip or society column. Twice a week, the ton happily reads about themselves hoping to find praise and anxious to see who will be insulted.

The mystery is eventually solved and it might just keep you guessing for most of the novel.

I loved practically everything about this novel. The characters of Penelope and Colin are special favorites of mine.
Posted by Becky at 10:09 PM

I adore Julia Quinn's Bridgerton series, but I think THE VISCOUNT WHO LOVED ME will always be my favorite.

I may have to add this to my TBR list, sounds good.
http://thebookworm07.blogspot.com/