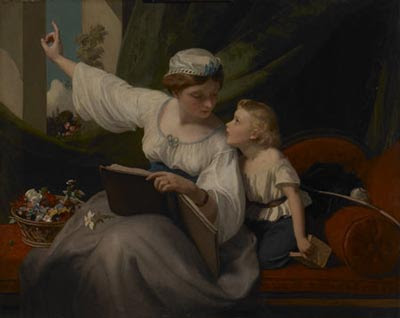 I will be trying to read all 200 of the stories gathered by the Grimm brothers this years. I'll be doing multiple stories all in one post. In case you're curious, the picture is "The Fairy Tale" by James Sant.

The Frog King or Iron Henry

This is the first tale in Household Tales. It is the story of a princess (a beautiful princess) who promises to be a frog's sweetheart if he will retrieve her golden ball from the well. She promises lightly never thinking that the frog will expect her to keep her word. To let him dine with her--share her food, eat from her plate, drink from her glass--and sleep with her, share her bed and pillow. She refuses once the ball is safe, but her father makes her keep her promises and she hesitantly complies. To her surprise, the frog then transforms into a handsome prince. The two are wed and return to his kingdom. He's met by a faithful friend and servant, Henry, who to show his grief wrapped his heart in three iron bands. I don't get that part. I don't think I'll ever get that part. But aside from that, it's a nice story.

Cat and Mouse in Partnership

This is the second tale in Household Tales. It is the story of an unusual friendship of a cat and mouse. While The Frog King might have had a moral--it's good to keep your promises--this one is perhaps less subtle but harder to put into words. The cat is a cat is a cat. And a mouse should NEVER forget that a cat is a cat is a cat. It's not eloquent but it's true. Anyway, the cat and mouse live together. They buy a pot of fat to store for the winter, they keep it in a church under the altar for safekeeping. The cat, on three separate occasions, sneaks away under the guise of attending a christening and becoming a god-mother to a new kitten. She's actually feasting on the fat. She tells her friend Mouse that the kitten's names are "Top Off" "Half Done" and "All Gone." The mouse is suspicious at times, but doesn't pester the cat for more details. When winter is come, the two go. The mouse then discovers the cat's business and gets angry and mouthy. The cat gobbles the mouse down and that is that. So I suppose the moral of the story is to be careful who you trust, be careful who you're friends with. Or perhaps the message is that nature always wins in the end--selfishness and (sometimes) greed are just part of human nature. That these vices are just "the way of the world."

I can honestly say I've never read this one before. Our Lady's Child is the story of a poor-but-beautiful girl who is taken from the forest to live in heaven with the Virgin Mary. One day when she is a teen--fourteen--Mary leaves her with the thirteen keys to the thirteen doors of heaven. She's told by Mary that she may open twelve of the doors, but forbids her to open the thirteenth. She shows her which key/door is forbidden. While Mary is away, the girl opens the twelve doors. But unsatisfied with just that, she opens the thirteenth as well. When Mary returns, though it is obvious the forbidden door has been opened and the forbidden room entered, the child denies it three times. She refuses to acknowledge her disobedience. She's sent in disgrace--and without a voice--back to the forest where it's a struggle to just survive day by day. Some time later, she's discovered by a king (or perhaps a prince). She's taken to his castle and marries him. She still can't speak, but he loves her very much. She has one child. The Virgin Mary comes to her in the night and says that if she will admit that she opened the forbidden door that her voice will return and all will be well. But if she denies it, then she will take her newborn child with her. She won't do it. Stubborn. Stubborn. Stubborn. This happens again and even once more. Two more children. She's now lost three children because of her lies and still won't repent. It is only when she's being punished (burned alive) for supposed cannibalism (eating her own children) that she repents. The Virgin Mary restores her children to her and restores her voice. The moral of this one is oh-so-obvious. Don't tell lies. Be honest. Repent of your disobedience. Or else very bad things will happen to you.

This fourth adventure is also new to me. It is the story of a stupid young man who doesn't know what it is to "shudder." Several people try to put a sense of fear, of dread into him. One man, a sexton, tries to spook him by pretending to be a ghost. Another man tries to spook him by having him sleep underneath a tree with seven hanging bodies. But no matter what anyone does to tries to do, this man is fearless and stupid. The king promises that he can marry his daughter if he can survive three nights in a haunted castle. Each night something weird and supernatural and spooky happens, but each morning he continues to tell the king that he still doesn't know what it is to shudder. He does marry the princess. It is his wife who teaches him how to shudder. Though I won't tell you how or why! Just in case you want to read this one yourself!

The Wolf and the Seven Little Kids

This story is one of my favorites. "Show me your paws" being a favorite catch phrase at chez Laney. It is the story of a mother goat and her seven kids. She warns them not to let anyone in the house while she is gone. She warns them that the wolf may try to trick them. And for the most part, they do follow her rules. The wolf does everything to disguise himself. And they do fall for it. Six of the seven do get eaten--swallowed whole. But one clever little kid hides in the clock-case. The one remaining kid and the mother goat must go on a rescue mission to see if the rest can be saved and to have their vengeance on the wolf. This story is truly enjoyable.

This one falls into the new-to-me category. And I think there is probably a good reason for that. This isn't one I'd imagine inspiring anyone to publish as a picture book. The story focuses on the loyalty of a faithful servant, John. At the old king's death bed, John promises to help and protect his son, the new king. And he's true to his word. The new king is young. When he sees a portrait of a beautiful maiden, he falls madly in love. Faithful John helps him win his love's heart--they kidnap her but then explain how it was for a good cause. He's a handsome and wealthy king after all. Then she seems to be fine with it. On the way back home--they're traveling via ship--John overhears three ravens predicting doom and gloom for the newlyweds. Each prediction comes with a stern warning. If it is told to another, the teller shall be turned to stone. Therefore if John were to try to warn the king and queen of any danger, or if he were to warn other servants or soldiers then he'd be turned to stone instantly. Therefore it falls to him to counter the three predictions and save the day. The problem? Well, in fulfilling the third, the king orders his death. I don't imagine many husbands let alone kings would like to walk in on the scene of him sucking three drops of blood from his wife's right breast. The fact that doing so saved her life didn't seem to occur to him at the time. His final words before he was to be hanged (or executed--I don't exactly remember the method--were of the raven's warnings. His life still isn't saved. He's stone now. But the king and queen are mournful. The years pass and it would almost seem that faithful john has been forgotten, but he hasn't. This is where it turns weird and violent and not what you might expect. But I'll leave you to discover that for yourself.
Posted by Becky at 6:17 PM