The Ask and The Answer (YA, Adult) 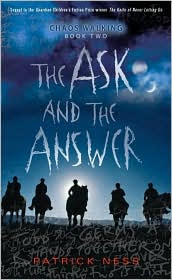 "Your noise reveals you, Todd Hewitt."
A voice--
In the darkness--
I blink open my eyes. Everything is shadows and blur and it feels like the world's spinning and my blood is too hot and my brain is clogged and I can't think and it's dark--
I blink again.
Wait--
No, wait---
Just now, just now we were in the square--
Just now she was in my arms--
She was dying in my arms--
"Where is she?" I spit into the dark, tasting blood, my voice croaking, my Noise rising like a sudden hurricane, high and red and furious. "Where is she?"
"I will be the one doing the asking here, Todd."
That voice.
His voice.
Somewhere in the dark.
Somewhere behind me, somewhere unseen.
Mayor Prentiss. (3-4)

The Ask and The Answer is the sequel to Patrick Ness's Knife of Never Letting Go. I don't know how to review this second book in the series without potentially spoiling the first one for readers. So if you plan to read the first book, then you might want to skip this one...(at least the plot summary)... for now. BUT before you go, I'd just like to say that you should read both books because this series isn't to be missed. IF you like science fiction, OR if you like dystopias, OR if you like wonderfully amazing oh-so-thrilling suspense novels. But don't assume that this one is so plot-driven (action, action, more action) that the characterization suffers. Far from it.

My attempt at plot summary. (Don't worry, the plot summary only covers the first few chapters.) 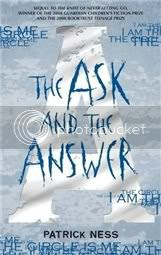 The first novel ended in a cliffhanger, a big cliffhanger. (One that frustrated me to no end and left me bitter.) The second one picks up soon after. Todd and Viola have been separated. And each fear the worst for the other. (Todd is panic stricken at the thought that Viola could be dead...or could be being held captive and being tortured. Viola fears the same. What has happened to Todd? Is he alive? Is he being tortured?) The two arrived in Haven--the place they thought offered some hope and relief--only to discover that Mayor Prentiss beat them there. Mayor Ledger, or should I make that the former mayor, decided to surrender the town to Prentiss--the rumors of Prentiss' army being way too much for him to handle. (Not everyone in the town agrees with this decision. There are some that are plenty angry that they didn't get a chance to fight, to defend themselves. There are some that want war.) Now Todd finds himself held captive by President Prentiss (Yes, he promoted himself!). And Viola finds herself in the care of one of the city's healing houses. (The healing houses are run by women, by healers. Remember, the men can't hear the thoughts of the women.) President Prentiss is putting on quite a show. But is his "I only want peace" routine for real? What do you think? There are some who are not buying it. Not for a minute. But the more important question may be can Prentiss convince Todd and Viola? Can he turn either one of them (or both of them) to his side?

My reflections on the novel...

What did I love about this one? Where to begin?! I loved the characters. Let's start there.

I loved that this one was narrated by both Viola and Todd. While Todd was more than okay as a narrator, I really appreciated Viola. It helped me get to know her better, of course, and this story couldn't have been told half as well as it was without this additional perspective. One person could have never told this story.

I loved the fact that both Viola and Todd are flawed. Wonderfully, perfectly flawed. As in they're so completely fallible and messed up that you can't help but love them all the more because of it.

Minor characters that are anything but minor. There is not a single character in this one that isn't developed. Okay, maybe we don't spend equal amounts of time with each of them. But nonetheless you get the idea that each one is real, that each one is living their own life outside the pages of the novel. (If that makes any sense.) Each one has their own story, their own journey. We don't get the complete story--that would be impossible. What this means for the reader is that instead of having one or two characters you care about, you come to care for a lot of them. And some of these are characters that you might feel--heading into it--that you shouldn't. Each character is so interesting, so fascinating, so human that you want more. Want more not because what is there is lacking--far from it--but because what you do have is so good.

The writing. It's impossible to do justice here. How many ways can I say that Ness amazed and wowed me? Seriously! What was awesome? He has a way with words. There were scenes and passages that just wowed me. Wowed me in different ways. I'd be reading along and find a passage and just have to stop myself to go back and reread. I'd think, "This is what reading is supposed to be like!" I can already tell you that I want to reread the whole thing again. Just to catch all those little things that I might have missed the first time round. I want to spend more time with this one.

The complexity. The plot. The characters. The timing. Everything is so very complex. Not in an overwhelming this-is-so-over-my-head way, not in an I-need-to-go-get-the-dictionary-way but in a wow, I didn't know it was even possible for writers to be so brilliant way. It's a smart book. You know how some books are like, "I'm literary look at me." This isn't that type of book. It's literary--don't question that--but it's not stuck on itself. It has all the entertainment value you'd expect. (Probably more than you'd expect if you're a skeptic like me.) But it's got substance and value.

© Becky Laney of Becky's Book Reviews
Posted by Becky at 9:16 AM

Labels: 2009, dystopia, international literature, review copy, Travel the World, YA Fiction, YA Romance, YA Science Fiction, YA Suspense, YA Thriller

I really enjoyed the first book, so am excited to read this, when it comes out in paperback or i can borrow it from the library! Great review, thanks!

I completely agree: so smart, so complex, and so entertaining at the same time.

Becky, I have to say that after reading the first book (and having that "throw it across the room" response to the cliffhanger), I wasn't going to read the second book. But you have made me give it some thought... Haven't decided yet, but maybe.

I also love how you broke out reviews with and without spoilers in your links. Very thoughtful!

Loved this. Finished it last night, still thinking about it. Also, thanks for the heads-up about Monsters for Men in a previous post!

This book is so far my favourite read of the year. It also takes out best series, best protagonist, best world building, best fonts etc etc etc! Totally agree with you about the complexity. How does he do it? It reads so easily and is 100% non-confusing, but so complex!

Glad you loved it too. And now ANOTHER wait for Monsters of Men.

(PS. I'm interviewing Patrick Ness, and it should be up on my blog later in the weekk/next week. I reviewed this one not long ago too.)