Tarzan of the Apes

I had this story from one who had no business to tell it to me, or to any other.

Who is Tarzan? Is Tarzan's boast at the end of the novel true? "My mother was an Ape, and of course she couldn't tell me much about it. I never knew who my father was." What do you think?

Our story begins with a young couple in love traveling the seas*. Unfortunately, they're in the wrong place at the wrong time. The sailors on board have mutinied. Their lives are spared, but they're abandoned. Left ashore who knows where. (They certainly don't know.) They do have a son, but before he's a year old, he's an orphan. First his mother, then his father. Fortunately, he's discovered soon after by an ape. Kala becomes Tarzan's mother. She's just lost her baby--in fact she leaves her baby behind, in the cabin, in the cradle. 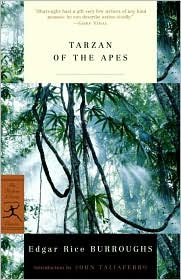 Raised by apes, Tarzan is as savage as savage can be. Mostly. Tarzan does realize--quite early on as he begins to mature--that he's not like the other apes. And he seeks to discover more. He returns to the cabin--discovers it I should say. And he begins to go through his parents' things. Of course, he doesn't know that the two skeletons (yes, they're still there) are his parents. And their remains don't bother him the least. He finds some books. And through the course of a decade (give or take a few in either direction) he teaches himself to read and write English. (Pretty amazing, isn't it???) That you could teach yourself to read and write all on your own having never heard a single word uttered? Also pretty convenient that his parents just happened to have the right kinds of books. Primers I think they're called.

The book is about his adventures in the jungle. His adventures hunting and killing. His quest to outsmart some of the creatures of the jungle. His curiosity in becoming a better hunter, a better killer. His curiosity at the black men he discovers. (A colony of cannibals, I believe.) He learns about bows and arrows and spears and other faster/quicker ways of shedding blood and glorying in it.

And so his life might have gone on quite bloodily--what with all the squabbles and hunts and fights and such--if he hadn't stumbled upon a small group of humans. Humans newly left ashore by another ship whose crew had mutinied. (Or so I recall.) Among them, a young woman named Jane.

And this is where it turns interesting.

As I discuss the novel, my reactions to it, there may be spoilers ahead. Details about what happens that could potentially ruin it for new readers. Granted, the book has been around for generations. And it has been adapted in many different ways. But I thought I'd warn you nonetheless.

I suppose this one could lead easily to the nature versus nurture discussion. Here we have a human child, a gentleman, quality bloodlines, being raised by "savage" apes. He lives in the wild. He knows nothing but hunting, killing, living off the land. He knows nothing of "proper" manners, he eats all his meat raw. And he's, of course, naked as can be. He knows no language but that of the apes. And yet...and yet...Burroughs has him learning to read and write all on his own. At least, Burroughs doesn't have him learning to speak English. Once he begins to read his parents' books he realizes that he's savage, that he should be different, that he should be wearing clothes.

Some things do come naturally. When he first sees Jane, he knows instinctively that he wants her, that he needs her. He desires her. End of story. But Burroughs also has Tarzan realize some of the limits. He comes to realize--with a few cues from Jane guiding the way--that he should not take her by force. That that is something only savage beasts would do.

Things come naturally--instinctively--for Jane as well. There is something within her that is attracted to this super-strength. His hunter/protector skills. There's something so earthy and vital about him that just attracts her. Even though she knows that she probably shouldn't be. Yet part of her wants to be with him--to be a part of his world. Even if it means losing some of her civility.

This one was published in the early twentieth century. And it's a bit brutal and bloody. A bit savage in the destruction of life--both human and animal. Even though the men he kills are killers themselves--hunters and cannibals--there is something about the whole mess that I find disturbing. Not that I want the hunters to kill Tarzan (or Jane or anybody). And I didn't like the fact that they killed Tarzan's mother (his ape mother). But the way that this tribe is described as sub-human could be offensive. I think it could have been a lot worse than what it was. But still. Tarzan doesn't see these men as "men." He sees them almost the same as other beasts in the jungle. Except for the fact that they decorate their bodies with jewelry and paint. (He likes this. So he adopts this. He begins to wear jewelry as well. Things he's taken from the men he's killed.) But even just the animal brutality and slaughter can be a bit much.

This actually sounds really sweet. I've never really known too much about Tarzan but the way you've described it has now got me kind of intrigued. Really good review, Beck, and I can honestly say that I'd pick this up if I saw it now. :-D

I haven't read Tarzan (now I want to!) but I do recall feeling the same kind of incredulity at Frankenstein, when the monster taught himself to read from books he found in a woodland cottage. That really stretched it for me.

I read this probably 10 years ago, and enjoyed it, in a "this is an interesting historical tidbit from the adventure genre" sort of way. The part that stands out most clearly for me is the part where he teaches himself to read using the primers. It's funny that this stands out as less realistic than, oh, him being raised by an ape in the first place, or any of the other things that you mentioned. Thanks for the review!

Ceri, I'm glad you enjoyed the review. It was a fun one to write :)

Jeane, funny that you should mention that. My mom just said the same thing. "You're giving me grief about Tarzan learning to read all by himself, and yet you think it works for Frankenstein???"

I NEVER EVER expected to find similarities between Tarzan and Frankenstein, but reading them so close together and discussing them as well has really shown me they have some things in common.

Jen, I agree. That's how I 'enjoyed' it as well. I like to read some of these older titles--Tarzan, Swiss Family Robinson, etc.--for perspective. At some point, I'd like to tackle Heidi and Black Beauty as well.

I tried Heidi once on audio and just couldn't get through it. Funny how some books are timeless and others, well, aren't. I did mostly enjoy Swiss Family Robinson (though you have to make kind of a mental shift to enjoy that one, too).