Look For Me By Moonlight (MG/YA) 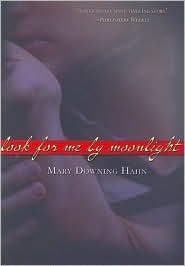 Sometimes you can pinpoint the exact moment in your life when things begin to go wrong.

Before Bella there was Cynda. Can Cynda out-Bella Bella? Read and see for yourself in Mary Downing Hahn's Look For Me By Moonlight.

Cynda is sixteen and going to live with her father. Her mother, you see, has remarried. And Cynda isn't all that fond of her new step-dad, Steve. Her father has remarried as well--in fact, he remarried first. Cynda will be meeting her stepmom, Susan, and her half-brother, Todd, for the first time. Where will she be living? In an out-of-the-way corner of the globe, at least in the middle of winter, an old, historic (reputedly haunted) inn in Maine. The winter is typically slow for the family business--the summer being the busier season for tourists. But their inn is about to have an unexpected guest, a strangely handsome (and silver-car-driving) one at that. His name... (Get ready for it...) is Vincent Morthanos. He's 30ish. But to Cynda, he's perfect. Just listen to her... 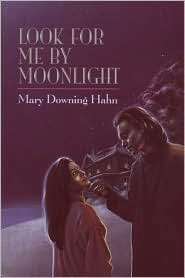 A stranger stood on the porch. The light shone full on his face, shadowing his eyes but accentuating his pale skin and high cheekbones. Sparkles of windblown snow clung to his dark hair and black overcoat. Even though he was at least thirty, he was the handsomest man I'd ever seen, the sort you stop and stare at in disbelief. (48)

His voice was deep and rich, colored with a faint accent. British, I thought. With that accent, anything he said, even the tritest phrase, would sound beautiful and fresh and new, as if no one had ever spoken it before*. (48)

The sound of his name was dark and sweet in my mouth, richer than the richest chocolate. (50)

And this one might just be my favorite of the bunch. Maybe.

Poetry--how perfect. It was just what I imagined Mr. Morthanos writing. Unlike Dad, he wouldn't depend on a word processor or even a typewriter. He'd use a fountain pen with a fine, gold point. Sepia ink on ivory parchment, the kind calligraphers buy. His handwriting would swirl gracefully across the page. (52)

She has quite an imagination doesn't she! I think she's living in her own little world. So naive. So innocent. So immature. So gullible.

More than once I'd caught him looking at me with an intensity I didn't understand. His eyes were dark, unreadable--did he find me attractive or simply amusing? It was hard to imagine a man his age being interested in me, yet I could have sworn something intangible quivered in the air between us, a knowledge, a familiarity, a scary sense of destiny fulfilled. When I fell asleep at last, Vincent followed me into my dreams... (59)

Those were his footsteps I heard, soft and deliberate, crisscrossing the floor overhead.
I sat still and listened, entranced by Vincent's nearness. The clock ticked, the wind blew, shadows shifted on the wall. Our guest continued to pace.
By noon I'd accomplished very little. Unless you counted the hundreds of times I'd written Vincent's name in my notebook. (63) 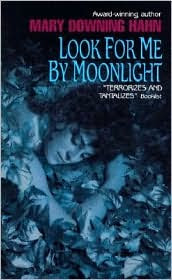 Are you cringing yet on her behalf??? Maybe this will get you...

Vincent took my hand and we walked on. "As you come to know me better," he said, "you'll discover I have a morbid streak which may not be to your liking."
I stared up at him, thrilled by his nearness and the touch of his hand. "I can't imagine disliking anything about you, Vincent."
His grip tightened. "You've just met me, Cynda. You have no idea what sort of man I am." He was smiling, teasing me, his voice full of humor.
"That's true," I said, trying to match his bantering tone. "I don't know where you were born, where you live, what sort of family you have. Why, I don't even known how old you are."
"I'm older than you think," Vincent said lightly.
"You can't be more than thirty."
He laughed. "Give or take a few centuries."
I laughed too, sharing the joke, and he gave my hand a squeeze. (75-76)

The title of this one comes from a line of poetry--from The Highwayman by Alfred Noyes, you may be familiar with it.

And it's used thematically throughout the book. Which works for the most part. At one point, Vincent reads the poem aloud to her and says...

"What a girl Bess was. Can you imagine loving a man enough to die for him?" (80)

Can you guess her response?

There were so many things I enjoyed about this one. It's definitely a darker romance. A romance with consequences**. Hahn chose to go with the more traditional (hence infinitely more dangerous, and definitely less sparkly) vampire hero. So expect blood, blood, and more blood. Also expect some ego.*** I'd definitely recommend this one.

Big thanks go to Leila who reviewed this one for the R.I.P. IV Challenge. She really, really sold me on it :)

*I love the fact that Cynda thinks this at a time when she's only ever heard him say one sentence.
**(Something I found severely lacking in Meyer's works, by the way. Little Miss Bella always got everything she ever wanted without ever having to sacrifice anything. She was rewarded for being whiny and naive.)
***The scene where Vincent is telling his history to Cynda just made me giggle. It's in chapter 16.


© Becky Laney of Becky's Book Reviews
Posted by Becky at 8:49 AM

Labels: brothers and/or sisters, library book, YA Fantasy, YA Fiction, YA Horror, YA Romance, YA Supernatural

I love that poem! I might have to check this one out...

Sounds great! Thanks for sharing!

The title and author sound so familiar, I'm wondering if I read this years ago. But the story and characters don't sound familiar at all. I may have to check this one out.

(I agree with you about consequences. They're important. Otherwise, what's the point of plot complications?)

I've seen this elsewhere this week, unfortunately not at my local library!

I recommend a reading of The Highwayman, the poem the story derives its title from. It is quite good!

Fun review as always, Becky. I love the inclusion of the passages from the book as it gives a really good idea of the writing style, etc.

I've never heard of this book before but it sure sounds great!