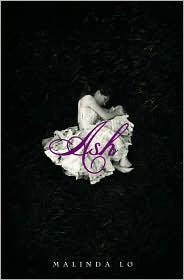 This one is a retelling of Cinderella with a twist. You may have already heard about that. This book is getting buzz on many blogs. The twist? Our Cinderella heroine falls in love with the huntress. (The prince doesn't even enter into it). That's not to say that the road to happily ever after doesn't have obstacles. But a human prince isn't one of them. No, this love triangle features a fairy, Sidhean. He is the fairy that bargains with her and grants her wishes. And there is a price to be paid for her wishes--her wishing to go to the ball, etc.

Some of the trappings of the traditional Cinderella remain, a young woman, Aisling (or Ash) is being raised by her stepmother alongside two stepsisters. Ash does work hard--taking the place of several servants at least. (Acting as cook and maid, etc.)

What did I like about this one? Well, I liked that Ash liked fairy tales. That her reading of fairy tales shaped her life, who she was and what she wanted. One of her favorite tales involved a woman, Kathleen, becoming so enchanted with the fairy world, with a fairy prince, that she lost herself. (This is found in chapter seven.)

Ash read and re-read the story as if it were a map to her own future. Though she knew it was meant to be a cautionary tale, now that she had seen the fairy, she thought that Kathleen's fate was not so cruel after all. (77)

I had a hard time connecting with Ash in a way. For the first half of the novel, Ash is so withdrawn from life, so depressed, so saddened by the loss of her parents, so obsessed with fairy tales and 'old ways' that she's hard to relate to. Her focus seems to be on death and not life.

This could be me, but it felt like we were being told more than shown. Her few encounters with the fairy world seemed a bit lifeless. In all honesty, I had a hard time connecting with this fairy world, with Sidhean. I don't think he was as fleshed out as he could have been. As Ash begins to awaken to life--and part of this is due to her friendship with the Huntress--she becomes a more interesting heroine.

The second half is more compelling, more vivid. Perhaps this is because the author gave more attention to the Huntress? To fleshing her out as a character? To giving her a strong personality and a life of her own?

I wasn't wowed. Not for the first part. (The novel is divided into two parts: The Fairy and The Huntress.) But the second half of the novel worked for me; with each chapter, I became more and more impressed. The book was wooing me a bit slower than I was expecting, but it did begin to work it's magic on me towards the end.

© Becky Laney of Becky's Book Reviews
Posted by Becky at 10:26 AM

Labels: YA Fantasy, YA Fiction, YA Romance

I really want to read this. Since you didn't love it, maybe I will just see if the library will buy it..

I'm sorry to hear the first part was a let down, but I'm glad the second one worked for you. I have a copy of this on its way to me and I'm really looking forward to reading it.

I just started this one at lunch, so we'll see how it goes! I'm always skeptical of the "big buzz" books.

Great review, Becky!
I agree the second half is more compelling; I think the part where it spotlights the relationship between Ash and the Huntress is beautiful.

I keep hearing great things about this so I'm sorry you didn't find that awesome. I'm still umming and arring about whether to read it. Great review as always though, Beck. :)

Becky, this is a wonderful review. I too had a really hard connecting with this book. While I agree that the Huntress was far more developed than Sidhean I wasn't drawn to her. I wasn't as interested in her development as I was in his. Maybe because I was looking for more of that fairy tale than I got I'm not sure. Either way neither story gave me any depth of romanticism. It all felt a bit flat. I like how you put it "we were being told". That was exactly what I felt but couldn't put a finger on.