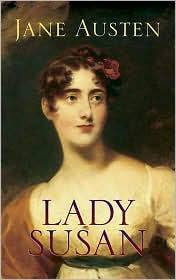 Think Austen is all about being prim and proper? Think Austen is boring? Well, just you read Lady Susan. Lady Susan has several things going for it. It's short for one thing. Just 41 little letters. (Yes, this is one of those books told through letters.) Just the right length for one or two afternoons. But perhaps even more importantly, it's different from what you might expect. It's fun. It's lively. It's snappy.
Sometimes what is not being said is half the fun. What's going on between the lines.

Here is one of my favorite lines: "Where there is a disposition to dislike, a motive will never be wanting."

Lady Susan Vernon. The woman every woman loves to hate. And not without reason! She'll come to visit and try to steal your husband and your daughter's beau** all in the same trip. Just ask Mrs. Mainwaring. 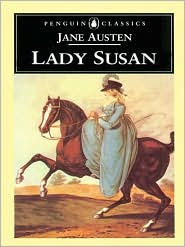 When this novel opens, Lady Susan is making a hasty retreat. She'd been staying--along with her daughter, Frederica, with the Mainwarings. But Mrs. Mainwaring has had just about enough of her. What with Lady Susan encouraging Mr. Mainwaring and Mr. James Martin. She's telling everyone who will listen to beware. So Lady Susan writes a letter to her dear brother. She'd just love to come and stay with him and his wife, Catherine, at Churchill.

When gossip arrives just ahead of her visit, why she'll come up with every excuse in the book as to why everyone else has got it wrong. She flirting with Mr. James Martin? And her only a few months a widow? Well, she was just trying to secure him for her daughter. And Mr. Mainwaring? Well, that's just a lie. Would she be receiving letters from Mrs. Mainwaring if the rumors were true?*** Fortunately, for the reader--and to the great entertainment of all--Lady Susan tells the truth to her dear friend, Alicia Johnson.

Catherine Vernon. The sister-in-law of Lady Susan. She can't stand "Lady" Susan. At all. She writes to her family--her mother mainly--the de Courcys. (We're also privy to the mother's letters--Lady de Courcy.) Catherine is really regretting the fact that Catherine's visit happens to coincide with her brother's visit. Reginald De Courcy is dumb, dumb, dumb when it comes to women. 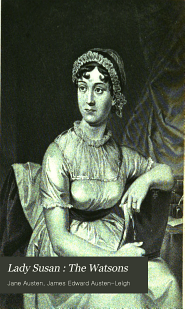 Alicia Johnson. A kindred spirit to Lady Susan. Or so we're led to believe. She loves to flirt and carry on as much as her friend, or does she? (She's a married woman. So technically, she shouldn't be acting like a wild woman.) Is there enough room in the world for these two sillies?

As Reginald begins to seek Lady Susan--he feels himself truly, madly, deeply in love--will Lady Susan's past come back to haunt her? Is there anything hidden (or not so hidden) in her life that will dampen Reginald's affections?

While men enter into the story--quite passively in a way--this one is all about women. There aren't any Henry Tilneys, Fitzwilliam Darcys, Colonel Brandons, or Captain Wentworths around for female readers to swoon over. This isn't a traditional romance. This isn't a oh-love-is-wonderful, let's-all-live-happily-ever-after piece. If Pride and Prejudice can be likened to Much Ado About Nothing, I'd say Lady Susan is more like A Midsummer Night's Dream. Where love is more lust, and where men and women are more foolish than wise.

So why would I recommend this one? Well, I think it's fun. I think the very fact that it is so short and yet so lively and entertaining works in its favor. I think it's a lot less intimidating than her other books.

*Written in the 1790s, possibly 1794. But not published until 1871.
**Or is that Miss Mainwaring a niece not a daughter? I can't remember and since they share the same last name, it's difficult to remember.
***The letters are in fact from Mr. Mainwaring. Whenever she receives a letter from him, she proclaims it from his wife. I don't think she's reading these aloud and passing them around.

Is it complete? I was under the impression that Jane Austen only completed six works...

Yes, it's complete. It wasn't published during her life time, of course. You can read more about it at Austenprose. They are having a two week "Soiree with Lady Susan."

I wish I could think of something witty or clever to say! Instead I'll just say that I enjoy books composed of letters, and that this one sounds enticing. Thanks for your review.

Hi, Becky. I just wanted to say that I really enjoy your blog and your reviews. I subscribed to your blog and it's always such a joy to read about the books you've reviewed. Thanks.

I actually think Austen's novels are fun, lively, and snappy too.

Great review Becky. I hope you got to pop in during the Soiree these past two weeks. I always enjoy you insights. Cheers, LA

Thanks for the great review Becky. I am so glad to see that you read Lady Susan. I loved it too. I hope that you were able to acatch some of the group read during 'A Soiree with Lady Susan'. I always enjoy your insights. Cheers, LA

Lady Susan sounds like an exciting character! It's the first time I've heard of this book by Austen. Will definitely look out for it.

Somehow I also had the impression this was incomplete - I'm glad to hear it isn't, though! It does sound like a lot of fun, and I love epistolary novels.

Great review, I have this book on my shelf with the other books of Jane Austen, but have not read it yet.
I hope to soon!

Definitely one I've been meaning to pick up. Great review!

I'm split between Pride and Prejudice and Persuasion. My favorite quote from Jane Austen is, "There could have been no to hearts so full, no tastes so similar, no feelings so in unison, no countenances so beloved."

I just read this one, and loved it! Have you read The Watsons and/or Sanditon. They're both delicious fragments.