Kilmeny of the Orchard 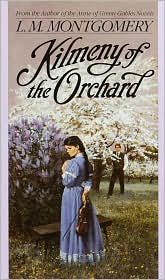 At least it was short. Of course, I can think of other things to say about this one. It is a bit unusual in that it is romance from a male perspective. A Montgomery book narrated by a man--Eric Marshall. (I'm so used to Montgomery's heroines: Anne, Emily, etc.)

Did I love Eric as a narrator? He was okay. But he wasn't an Anne or an Emily. Eric wasn't the most thrilling of narrators--he was just a good guy with a good heart. Slightly on the boring side. (A flaw or two might have helped here. Made him seem more human, more vulnerable.)

Of course, this is one of Montgomery's earlier novels--her third to be exact if Wikipedia is to be believed.) So I think it comes across as a bit more amateurish perhaps? It felt that way to me.

What is it about? Well, Eric has just graduated from college. He receives a letter from a friend asking a favor. His friend wants him to take his place as school teacher in the small PE island community of Lindsay. Eric, being the good guy he is even though he never wanted to be a teacher, agrees. He moves into the boarding house--which is of course run by some lovable characters that just happen to me more interesting than Eric himself. One evening, he is out walking in an orchard and he hears some lovely violin music. He sees a beautiful woman playing soulful music. It amazes him. He's struck speechless almost. This mystery woman is named Kilmeny. She's "dumb" (that's how they refer to her muteness, her inability to speak) but he comes to love her truly, madly, deeply.

Kilmeny's family history is a sad one. And her upbringing is very strange. But she's got a heart of gold. So pure, so innocent, so lovely. (Is it wrong for me to find her goodness and purity a bit too much? She's too perfect. But, of course, she doesn't realize she's perfect. I know it sounds horrible. But both Eric and Kilmeny seem too good to be true.)

One thing that did bother me about this one was the characterization (or lack thereof) of the "villain" Neil. Here we have a character that is slandered almost from the first chapter simply because he's Italian. He was a baby taken in by the Gordon family. (Kilmeny is a Gordon as well.) Neil's mother and father, I believe, were peddlers. His mother died soon after he was born, and the father moved on without him. The Gordons--the family the peddlers just happened to stop at the day he was born--are left with a newborn on their steps. They seem happy enough to take him in. Feel it would be "better" for them to raise him than to send him to an orphanage. But apparently, the community is anything but welcoming. The way he's treated in the community--by children and adults alike--made me squirm. I found it very distasteful. The message being somewhat in favor of nature versus nurture. He'll never amount to anything because he's got "bad blood." He'll never be one of us. Anyway, when Montgomery made him the villain, she lost me.

I don't like unnecessary villains. Characters that supposedly are part of the story to add friction and conflict. Characters that are more plot devices than, you know, actual characters. You know the character Jud from Oklahoma. What authors should realize--at least from my perspective--is that some stories simply don't need those one dimensional villains. Oklahoma didn't need Jud. Laurie and Curly don't need Jud to fall in love. They're head over heels in love with each other before the show even starts. And Kilmeny of the Orchard doesn't *need* Neil to be the villain. If she wanted him to be a 'real' villain, we needed to know more.

Other reviews: Once Upon A Bookshelf, A Fair Substitute for Heaven, Reading to Know.

I've read a few of Montgomery's books, but not this one. I didn't even know what it was about, so thanks for the review!

This book was written a long time ago, back when it was perfectly acceptable to treat people badly because of what blood ran through their veins. When I come across stuff like that in old books, I prefer to view those things as a bit of a history lesson. That's just how things were... even if, by today's standards, those attitudes are rather abhorrent. We can't change the past, no matter how much we dislike it.

As much as I love LMM, this work displays the overt racism of the time period more clearly than her other books (although there are certainly a lot of passing references to not wanting to hire the French boys, etc. in the Anne novels.)

Makes me look hard again at some of the issues of adoption she brings up... Anne was brought to Green Gables because they needed a boy to help Matthew, and the speech Rachel Lynde lays on Marilla ("That's the kind that puts strychnine in the well!") is very revealing as well. Adopting family members was one thing; it happened quite a lot when entire families were wiped out by some disease or accident. But they certainly did frown upon bringing strangers into the home, just as surely as they frowned upon marriages when people had no family to recommend them.

Eric's one salvation is that he wanted Kilmeny to learn to speak. Thank goodness she didn't write, "Eric had at last met the perfect woman: beautiful, talented, and utterly silent. He married her AT ONCE." *hee*

Interesting review, Becky. I've read it, but I don't recollect much of the plot - but I do remember finding a certain snobbishness rather - well - distasteful might be a harsh word - off-putting perhaps is a better one. L.

Anonymous L., I think if I'd liked the romance a bit more then maybe the other wouldn't have stood out so much in contrast.

Lisa, you make a great point. I think there was social snobbishness/class differences involved. Maybe it was the fact that his parents were peddlers? I don't know, I just get the feeling that they looked down their noses on anyone who immigrated. There was even some snobbishness involved if you weren't from PE Island itself. Didn't they make references about Nova Scotians? I know they looked down their noses on Americans. They always had plenty to say about them. I don't know how "normal" this is or not. But this time around it was really striking.

I agree, I think it gives us a unique opportunity to discuss the past, to discuss racism, to discuss these social issues. I wouldn't not recommend the book because of this. But it didn't sit well either. I'm experiencing somewhat the same thing (although very differently) in reading Tarzan of the Apes.

I was unaware that Montgomery had written any novels from a male perspective. I've only heard of the famous Anne and (my favorite) the Emily books, and a few others.

You know, when a review starts with "at least it was short" it can't be a great book.

Though, I suppose every author can't write a brilliant book every time.

This is actually one of my favourite books! I know that there is an element of racism to the book towards Italians, but I personally chose to overlook that and enjoy the sweet story instead of dwelling, you know? When reading older books I tend to overlook racism as it was part of their culture and totally acceptable at the time it was written. If it's a newer book the author should know better, but with the older books, they didn't know better, so I don't blame them. If we were all over racism in old books, when, at the time the book was written they didn't know any better, no one would read classics like Tom Sawyer or Huckleberry Finn. Sorry for ranting, I'll stop now :).