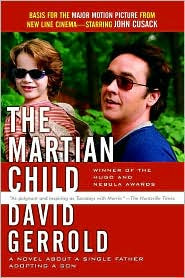 Toward the end of the meeting, the caseworker remarked, "Oh--and one more thing. Dennis thinks he's a Martian."

Why did I pick up The Martian Child? It was part impulse. It was on display in the 'popular book' section*. I don't know what I saw first: John Cusack's face, the word Martian, or those lovely little words "winner of the Hugo and Nebula Awards." But talk about an irresistible combination for me.

What is it about? It's about two people finding each other. Two people making a connection--a connection that is "against the odds" according to some. You see, David is a single guy (a gay man) who wants to adopt a child, a son. And Dennis is a young boy who has been in the foster care system for almost all of his life, and, well, even his caseworkers don't believe in him, don't like him. They're doing their jobs. But they don't like him, don't care about him, he's just a file to them. A thick file. A problem on their hands. But when David sees his picture, he feels something. His instinct tells him this is the one, this is my son. When David realizes he's the only one that cares about what happens to this little boy, well, let's just say that it's something worth reading about.

Did I enjoy this one? Yes. I read it in one afternoon. I couldn't put it down. It was an emotional story--it had its ups and downs. But from the very first page I cared. I loved the writing. It was incredible. David Gerrold knows how to tell a compelling story.

There isn't any way to stop telling stories. Storytelling is the fundamental act of communication. It's a major part of being human.
Every time a person communicates, he tells a little story--what happened to the last piece of chocolate cake, why the dog is wearing your sister's hat, and why the UFO's haven't returned Elvis yet. Big stories, little stories. Why I was late for work, why I was speeding, and how this phone number got into my wallet. I can explain everything. I can tell a story.
The stories we tell--that's us explaining how we think the world works. Once we speak it, once we say it aloud, that makes it real for us--and real for everyone else who hears it too. When we tell a story, we invite people to visit our reality. We invite them to move in. Our stories are the reality we live in.
That's very powerful.
Because we can choose what stories we want to tell--we can choose the stories we want to live.
Here's my story--

So do I recommend it? Yes! I really think this one has a lot to offer readers.

*There are times I doubt this section. Not all the time, I browse the shelves and see new books by 'big' authors, books making the rounds in the blog world, but then occasionally I'll find the odd book. A book that is older, much older. A book that makes me want to sing "one of these things is not like the others..." A book that makes me think the person shelving just didn't want to make the walk upstairs.

© Becky Laney of Becky's Book Reviews
Posted by Becky at 10:59 AM

I have an award for you on my blog.

This sounds like an important book. Thanks for an interesting review.

This really is a fantastic book! It is so interesting. You cry and you laugh out loud. You really can't help but caring after the first page. You are totally right. (They did a terrible job on the movie. Besides for John Cusack, my hero.)

It sounds like a powerful and touching story. I'll definitely look out for it.

Ooh, I've been looking forward to seeing the film for ages. I didn't know it was a book - I'm going to have to pick up this one. :-D

Suko, it's a very interesting book. I can only hope I did it justice. It has a little bit of something for every type of reader. It can be very funny in places, but it can also be very heartfelt and serious.

Nichollelee, you're right! I wasn't expecting to find so much within such a short little book. I haven't seen the movie...I don't even remember seeing any trailers for it.

Hazra, I hope you enjoy if/when you pick it up. I did find it very powerful--in a down-to-earth way. It wasn't a story that was full of itself. It was just very real, very human.

Ceri, I hope you enjoy!

I had no idea this was a book. I saw the movie, which was very touching. I'm going to have to look into this.