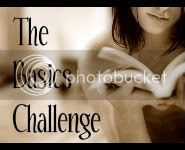 Do you want to help me out? I've signed up to do the Basics challenge, and I could use YOUR help in coming up with a list. The challenge is similar to the Fill-in-the-Gaps challenge, except that it asks you to create a genre-specific list. I'm leaning towards choosing 'speculative fiction' as my genre so I can include science fiction, fantasy, and paranormal/horror. So do you have any suggestions for me? Any older titles that are must-reads for the genre? Any books that you think every one should read? Or how about naming specific authors?

What I read in a previous week, but reviewed this week:

What I read this past week and reviewed:

What I read this past week and haven't reviewed yet:

What I've read and really, really need to review:

What I'm just fooling around that I'm reading:

Discordia: The Eleventh Dimension by Dena K. Salmon (abandoned after 66 pages)
Opening Atlantis by Harry Turtledove (abandoned about 120 pages from the end; but couldn't renew)
The Pirates! In An Adventure With Napoleon. Gideon Defoe. (abandoned 91 pages in.)

I still love how The Pirates! opened though:

Soon all the pirates are chiming in with their ideas of what is 'best.' And a fight breaks out.

But before they could really get going the doors to the downstairs of the pirate boat crashed open, and out strode the Pirate Captain himself. If you were to compare the Pirate Captain to a type of sedimentary rock--which after types of tree, creatures, and fonts was the next most popular thing for the pirates to compare stuff to--he would undoubtedly be a slab of polished sandstone, or maybe chert. The pirates all took one look at the Captain and stopped their argument dead in its tracks. Fists froze mid-swing and mouths hung agape. The Pirate Captain often had this effect on the crew, but usually it was because they held him in such high regard or because they were dazzled by his fantastically glossy and luxuriant beard. Today though, their sudden speechlessness had more to do with the fact that the Pirate Captain was wearing only a tiny bright-red swimming costume which left nothing to the imagination. (2)

© Becky Laney of Becky's Book Reviews
Posted by Becky at 10:54 AM

Three that I've read recently and enjoyed are: The Last Unicorn by Peter S. Beagle (sci-fi,) Gods Behaving Badly by Marie Phillips (spec. fict,) and The Book of Lost Things by John Connolly (sci-fi.) If you haven't read them, look them up for your challenge.

You've had a really great reading week, Becky. :-D And, gosh, I love A Knight's Tale. It's been so long since I saw that - I think I fell in love with Paul Bettany when I went to see that when it first came out. :-D

Rich is currently reading The Pirates! in an Adventure with Scientists aloud to the boys...they are so loving it! And I'm loving it from afar because I so enjoy hearing their giggles come floating in from the next room. :D