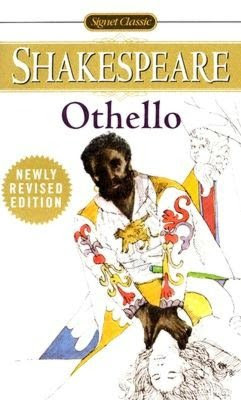 This "review" assumes you know the story. I did not include any summary. Just my rambling thoughts on rereading this play.

I happened to read Othello and Much Ado About Nothing within days of each other. Both plays are rereads for me, though, I admit it has been years since I read them. One thing that I do get each time I read or reread Shakespeare are how similar his plays are to one another. In the case of Othello and Much Ado About Nothing, both are about jealousy--though in different degrees, of course. Claudio jumps to the conclusion that Hero is unfaithful, unchaste, unworthy, etc. Claudio at least sees with his own eyes a woman he believes to be Hero caught in the act with another man. Othello, well, a mere flimsy suggestion will do to enrage him to the point where he kills. Of course, the difference between the two plays are night and day. Much Ado About Nothing has mirth, joy, pure delight, pure comedy. It has two strong, very strong, romances at its core. Yes, it has its dark moments, it has moody moments, moments where it could technically go either way--tragedy or comedy. One other small observation, Iago is jealous in Othello, obviously, every scene he's in drips with it really. But I think Much Ado About Nothing has that as well, though we don't know the details exactly, Don John being only newly "reconciled" to his brother Don Pedro. It doesn't take anyone very long to realize that this reconciliation is a joke. Don John's hostility barely being concealed at any moment in time. Iago definitely, definitely has the better lines and makes for a much better villain.

I am going to try to focus more on Othello now, I promise. So what did I think of Othello? Well, what I noticed this time was how doomed Desdemona was practically from the start. Which dared me to consider was her father right for half a minute? Was the marriage unwise on her part? Was marrying Othello the biggest mistake of her life? Did it *have* to be? Or did it just turn out that way? Lest you think that I have any liking for her father, I don't, I really don't. Because he plants a seed in Iago's favor. He TELLS his new son-in-law, DON'T TRUST MY DAUGHTER FOR HALF A MINUTE. She's not trustworthy. She's not worthy. She's a liar. She may outwardly show obedience for a time, but don't let that fool you. Of course, he didn't exactly use those words, but the point is the same. He told Othello that Desdemona would do wrong by him, that it was just a matter of time before he came to regret this marriage. He slanders his daughter, ruthlessly slanders his daughter. And though Othello doesn't seem to take this "advice" seriously, you add in another person with the same kind of "advice," the same kind of "wisdom," the same kind of lies, and Desdemona is doomed. Because Othello apparently trusts Iago five-hundred-times more than he'll ever trust his wife. Why? Well, who knows?! Iago's just good like that. Iago can say anything, do anything, and people just love and adore him and think he's telling the truth. Of course, the audience isn't fooled because Iago is transparent with them. (Much like Don John is transparent to the audience.) So is there a person Iago doesn't manipulate in this play? I'm not sure there is. Iago uses his wife to help condemn Desdemona (much like Margaret unknowingly helps condemn her mistress, Hero). By giving her husband the handkerchief, by giving it to him without considering what he'll use it for, she sets in place her mistresses downfall. For Iago will plant the handkerchief on Cassio and use it as the primary evidence against Desdemona. Though if Emilia hadn't given him that, he'd have been resourceful in coming up with plan B, I'm sure.

So how do I feel about Othello as a person? Well, I can't really sympathize with him. Maybe I should, maybe I'm supposed to, but, really I just see him as a jerk with a quick temper, a dark, dark, very-dark violent side. I see him quick in his judgments. I see him as a person with big, big issues. Why doesn't he trust his wife? Is there any reason in the world that she has given him? Other than the fact that she doesn't volunteer forth the information, hey, by the way, dear, I lost the handkerchief you gave me when we first started courting, could you help me find it? I don't know where it's gotten to. Othello just strikes me as too moody, too mentally-unstable to ever be a good husband.

But I don't doubt for a second that Desdemona *did* love him in spite of his flaws. And if she could talk beyond the grave, I'm sure she'd forgive him for killing her. She's just like that. She doesn't care how Othello treats her really, he's just her everything.

So while I don't necessarily "like" any of the characters in this one, well, like in the traditional sense. I do think it's got some great, great lines in it. I think Shakespeare did a good job with it.