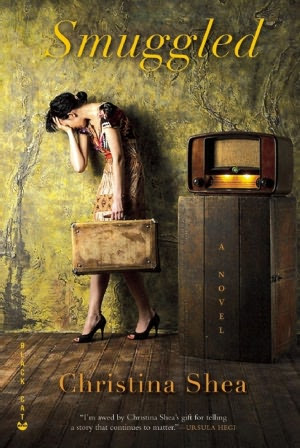 They would slip her between the seams of the two countries.

This historical fiction novel sounds like it would be a perfect fit for me. The heroine, Eva, is a very young child who is smuggled out of Hungary into Romania during World War II. She's sent to live with her aunt and uncle. She's given a new name, a new history or backstory, and, of course, new documents that hide her Jewish identity. She's forbidden to speak of her old life, forbidden to speak her own language--at least after the first two weeks or so. She's forced to adapt really, really quickly. Unfortunately--for me--the novel barely covers the war years. It seems like we're just getting started to know this frightened young girl renamed Anka, when, we're rushed at a very alarming pace through her childhood years, teen years, college years, and adult life. Almost half the novel is spent with her as an adult in the late 60s, 70s, 80s, and early 90s. For readers who truly want to know all the gritty little details about what it might have been like to live in Romania during the Communist years, this one may be just what you're looking for.

The novel is very dark. Of course, it would almost have to be dark. In some ways the bleakness of the novel was almost too much for me. Especially as it traces just how far the narrator--Eva/Anka--will go to survive. I did NOT want to read about her personal life in that much detail. (This one is far from clean, trust me.)

Smuggled isn't a bad novel, it's just more of a not-for-me novel. I was hoping for more of a child/teen perspective/experience about World War II and maybe the early years of Communism--but I wasn't expecting it to cover quite so many years. And the attention to detail varies so much! There were things that I would have loved to read about--the war years, what it was like to live in hiding, have a secret life, what was it like to learn a new language, to be placed in a new family, etc. How she *really* felt about both her aunt and uncle, did she have a hard time adjusting, did she make friends, was it easy for her to go to school and have a 'normal' life after the war, what was it like to go to school, etc. How did it feel to hide her Jewishness for so many years--so many decades?

If you're looking for a novel about an oppressed woman that endured much...then this might be for you.

Your gifts actually make the recipient recall the sweet time and terms staying together, and if your connection stays in Gurgaon, you have the made easy way to land a grand joyous moment on them. It’s the gift collection from GurgaonFlowerShop.com
that does it all, and www.gurgaonflowershop.com
is the link that fetches you them all.