Princess and the Goblin (MG/YA) 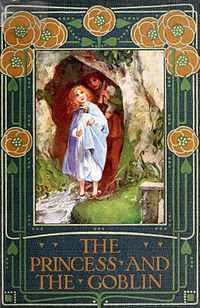 There was once a little princess whose father was king over a great country full of mountains and valleys. His palace was built upon one of the mountains, and was very grand and beautiful. The princess, whose name was Irene, was born there, but she was sent soon after her birth, because her mother was not very strong, to be brought up by country people in a large house, half castle, half farmhouse, on the side of another mountain, about half-way between its base and its peak.

It isn't the easiest novel in the world to describe, but, I'll do my best to do it justice. Princess Irene is the heroine. She lives a very, very sheltered life. She hardly ever goes outside the safety of the castle, but, when she does she often stumbles across Curdie, a young boy with hero-potential. If the castle and/or the kingdom is at risk, if their peace is threatened, they are unaware of it. But Curdie stumbles into danger and unveils a plot. GOBLINS. Goblins set on revenge, goblins who want war, goblins who want to overthrow the kingdom and perhaps steal the princess.

Here's the introduction to goblins:


Now in these subterranean caverns lived a strange race of beings, called by some gnomes, by some kobolds, by some goblins. There was a legend current in the country that at one time they lived above ground, and were very like other people. But for some reason or other, concerning which there were different legendary theories, the king had laid what they thought too severe taxes upon them, or had required observances of them they did not like, or had begun to treat them with more severity, in some way or other, and impose stricter laws; and the consequence was that they had all disappeared from the face of the country. According to the legend, however, instead of going to some other country, they had all taken refuge in the subterranean caverns, whence they never came out but at night, and then seldom showed themselves in any numbers, and never to many people at once. It was only in the least frequented and most difficult parts of the mountains that they were said to gather even at night in the open air. Those who had caught sight of any of them said that they had greatly altered in the course of generations; and no wonder, seeing they lived away from the sun, in cold and wet and dark places. They were now, not ordinarily ugly, but either absolutely hideous, or ludicrously grotesque both in face and form. There was no invention, they said, of the most lawless imagination expressed by pen or pencil, that could surpass the extravagance of their appearance. But I suspect those who said so had mistaken some of their animal companions for the goblins themselves—of which more by and by. The goblins themselves were not so far removed from the human as such a description would imply. And as they grew misshapen in body they had grown in knowledge and cleverness, and now were able to do things no mortal could see the possibility of. But as they grew in cunning, they grew in mischief, and their great delight was in every way they could think of to annoy the people who lived in the open-air storey above them. They had enough of affection left for each other to preserve them from being absolutely cruel for cruelty's sake to those that came in their way; but still they so heartily cherished the ancestral grudge against those who occupied their former possessions and especially against the descendants of the king who had caused their expulsion, that they sought every opportunity of tormenting them in ways that were as odd as their inventors; and although dwarfed and misshapen, they had strength equal to their cunning. In the process of time they had got a king and a government of their own, whose chief business, beyond their own simple affairs, was to devise trouble for their neighbours. It will now be pretty evident why the little princess had never seen the sky at night. They were much too afraid of the goblins to let her out of the house then, even in company with ever so many attendants; and they had good reason, as we shall see by and by.

The story is essentially told through two perspectives that of Curdie, who overhears the plotting and later stumbles into the goblins' realm or kingdom--where he is imprisoned underground; and that of Princess Irene who is a lonely child who likes to explore the castle. One day she discovers her great-great-great-great-great grandmother. An old woman named Irene. The two become good friends, great friends, but the truth of the matter is that NO ONE believes in the existence of this old woman, no one believes that Irene has found a woman living up high in one of the now-forgotten castle rooms. Irene visits her a time or two, Irene listens carefully to every word, every instruction. And Irene is happy to be a believer even if it means her nurse laughs at her for her overactive imagination, even if it means her father chuckles at his little girl's dreams, even if it means Curdie calls her a fool.

What makes this book so wonderful is the writing. My description of it may not do it justice...at all...it may not sound like it would be a good story, a charming and delightful story. But MacDonald is such a great writer, that it just works. His writing reminds me of E. Nesbit, C.S. Lewis, J.R.R. Tolkien. For example, this story is sprinkled--liberally--with poems and songs. And the book does have this adventuresome spirit to it. It's just a lively, delightful story. I think it's a must for those that enjoy fairy tales and fantasy stories.

But that is the way fear serves us: it always sides with the thing we are afraid of. (112)

It is when people do wrong things willfully that they are the more likely to do them again. (120)

The right old age means strength and beauty and mirth and courage and clear eyes and strong painless limbs. (129)

"We are all very anxious to be understood, and it is very hard not to be. But there is one thing much more necessary."
"What is that, grandmother?"
"To understand other people."
"Yes, grandmother. I must be fair--for if I'm not fair to other people, I'm not worth being understood myself." (191)

Read The Princess and the Goblin
© 2012 Becky Laney of Becky's Book Reviews
Posted by Becky at 2:32 PM

I loved this one too!

what a great post! thanks for sharing
New follower
-Buffi
My Wonderfully Dysfunctional Blog

One of my favorite books ever. I loved this as a child and have read it to each of my children, still loving it!

I love how you described Curdie's "hero potential." Whenever I read this book to my boys, I always enjoyed it twice as much as they did.