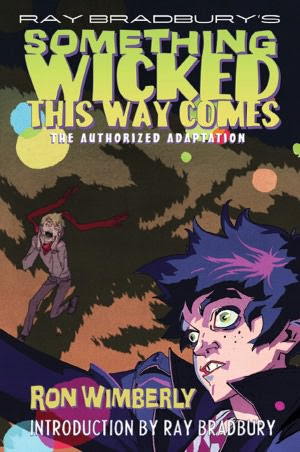 First of all, it was October. A rare month for boys. Not that all months aren't rare. But there be bad and good, as the pirates say. Take September, a bad month: school begins. Consider August, a good month: school hasn't begun yet. July, well, July's really fine: there's no chance in the world for school. June, no doubting it, June's best of all, for the school doors spring wide and September's a billion years away. But you take October, now. School's been on a month and you're riding easier in the reins, jogging along.

What makes a graphic novel adaptation work? I'm not sure I could say. For graphic novels are not in my comfort zone at all. I rarely pick up graphic novels to "review," for I don't feel qualified to comment. The graphic novels I tend to read are adaptations of novels that I've already read--for better or worse.

I recently read the official adaptation of Ray Bradbury's Something Wicked This Way Comes. What did I think of it? Well, it made me WANT to read the book, the "real" book. This story, in its adaptation, in its abridgment, just wasn't enough to satisfy me. I wanted more, needed more. That's not a bad thing at all. If every single reader of this graphic novel responds the same way I did--with the NEED or DESIRE to pick up the original Ray Bradbury novel, that wouldn't be a bad thing. Indeed, you might say it was a GOOD thing. For there is no replacing, no improving the original novel.

The magical wonder--the horror, the terror, the suspense--of this story is in the words, the phrases, the sentences. And this graphic novel adaptation is able to only capture a part of that wonder. Every reader will have to decide for himself (or herself) if the addition of the illustrations is worth losing a little something of the original. (For the record, only the cover has colored illustrations, the rest of the graphic novel is in black and white.) For me, the graphic novel just doesn't have that magical something of the original. 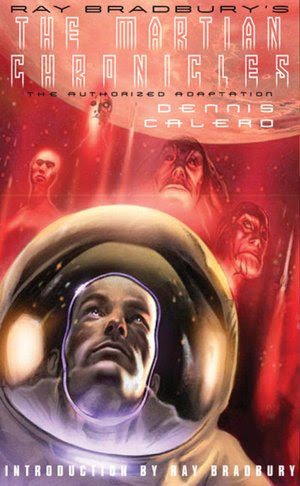 One minute it was Ohio winter, with doors closed, windows locked, the panes blind with frost, icicles fringing every roof, children skiing on slopes, housewives lumbering like great black bears in their furs along the icy streets.

Compared to the adaptation of Ray Bradbury's Something Wicked This Way Comes, the official adaptation which I reviewed above, this adaptation of The Martian Chronicles is very satisfying indeed! Now, here's where it becomes tricky, compared to the original novel by Ray Bradbury, it still is second best at most. (I haven't listened to it on audio, or any radio dramas of it, and I definitely didn't make it past the twenty minute mark on the made-for-TV adaptation of it.) I definitely liked the cover and thought it well done! And the illustrations in this graphic novel are full color!!!

Some of what is 'missing' are just vignettes or preludes, but, I think some of the preludes help transition between stories. For example, reading "The Luggage Store" before "The Off Season" helps. As does reading "The Old Ones" before "The Martian." And I think something is lost by not including "The Silent Towns" and "The Long Years" which reflect the absence of life on Mars, and "There Will Come Soft Rains" is the perfect, perfect story for setting up "The Million Year Picnic". Something important, something vital is missing--in terms of tone, of message--if you don't have the full sequence.

So the full-length stories that are missing are: The Fire Balloons, The Wilderness, Way In the Middle of the Air, Usher II, The Silent Towns, The Long Years, There Will Come Soft Rains.

How do I feel about the adaptations? Well, I thought some of them were well done. Probably my favorite adaptation was "Night Meeting."

Is the original novel still best? Yes!!! I won't lie. This collection of short stories is so wonderful, so amazing, so incredible, so thoughtful, so soulful, so beautiful, so practically perfect in every way that I have to say that the original is better than any adaptation.