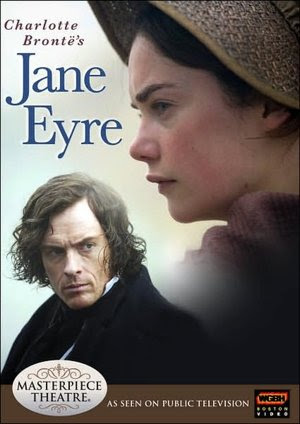 I loved Georgie Henley as the young Jane Eyre. I just LOVED her! This adaptation hardly spends time on Jane's childhood, but for what we do see in those short minutes it was love. Granted, I will always see her as Lucy (from The Lion, The Witch, and The Wardrobe), and so that does bias me a little in her favor. But I thought they included just enough of her childhood to flavor the movie.

I loved Christina Cole as Blanche Ingram. Out of all the Jane Eyre adaptations I've ever seen--four or five at this point?--she is the BEST Blanche I've ever seen. The scenes with Blanche and the other house guests worked so incredibly well. Viewers know that Mr. Rochester is just using Blanche to make Jane Eyre jealous, that he is manipulating both women. But we also get a sense that Blanche is using him as well, that she sees him purely as status and wealth. And so it's easy to excuse Mr. Rochester perhaps. Still, he's technically in the wrong.

There were a few scenes that I liked (a little) better in this adaptation. For example, when Jane Eyre "saves" Mr. Rochester when his bed curtains are on fire. The aftermath of that fire when they're talking and he holds her hand. It is in the 1983 adaptation too, of course. But in this movie, viewers see Jane Eyre go back to bed. And the emotion she conveys actually reminds me a bit of "I Could Have Danced All Night" from My Fair Lady. Viewers catch a glimpse of Jane Eyre's love for Mr. Rochester, and how she holds him dear, and how she is treasuring up his touch of her hand. It could be viewed as silly, I suppose, but I think it's heartfelt too.

Adele. The scene where we first meet Adele was nicely done. I liked meeting her in this way, with her singing and "performing" in French. The subtitles translating the song were quite effective. They conveyed to the viewers part of Adele's tragic background. And I think we do catch glimpses of her neediness, her desperation for love and acceptance and family. True, she may appear a brat, a horribly spoiled brat, but, I think there is something more that could be there. But this isn't Adele's story, and, it's easy to forget about her completely.

Her cousins. Well, in this adaptation St. John Rivers does not come across as a horrible-horrible-horrible man. For better or worse depending on how you read Bronte's novel! And his sisters do have a young, vibrant feel about them in this adaptation. In the 1983 adaptation, they appear much older, much more settled, content with what little they have and not expecting life to offer them any entertainment or thrills.

I do think this adaptation does a better job with ambiance, capturing the gothic elements of the novel, and the movie is more sophisticated and polished in terms of sets, scenery, costumes, soundtrack, etc.

But. This movie does take liberties with the story and the characters. Mr. Rochester's scenes with Jane Eyre aren't necessarily going to be from the book, or true to the book, or true to the spirit of the book. In some scenes, yes, they are similar enough that it works...especially if it's been a few years since you've last read the book. The fuzzier your memory is, the better. And some scenes do feel like they could be authentic enough to the book because they get the characterization right. But. In other scenes, well, liberties were taken.

There were two scenes that bothered me in this adaptation, the two scenes with the most liberties taken. One scene was the "after wedding" scene, but, really it is the after-the-non-wedding scene. It is very sensual, too sensual in my opinion. Jane Eyre and Mr. Rochester on a bed kissing and caressing while he tries to make excuses for his having kept his mad-wife a secret AND trying to convince Jane that he wouldn't try to tempt her if only she would consent to travel with him and go far away, they could live as brother-and-sister. I didn't buy that argument for a second, if, he truly respected her and wanted to be completely honorable he wouldn't have her on a bed right then and there trying to use his kisses to convince her to stay. This scene is completely wrong for a couple of reasons. One, it is NOT true to the book, not true to the characters, not true to Charlotte Bronte. You'd never find the scene written out like that in Charlotte Bronte's novel. The novel uses words, charismatic words spoken by a passionate Mr. Rochester, to try to convince Jane to stay, to try to help her understand. Read the scene from the book and it is SO MUCH BETTER. The second scene that bothers me is the near-ending where Jane and Mr. Rochester agree to marry and live happily ever after. The book is SO MUCH BETTER. And the changes they made just didn't sit well with me.

So what did I think of Toby Stephens as Mr. Rochester? Well, I thought he did a good job in some parts, in some ways, in some scenes. Some of his scenes worked better than others. But. He did a good job. He was likable. He was charismatic. He was passionate. You could tell *why* Jane Eyre would be drawn to him. And the film does a good job in building their relationship. But he isn't Timothy Dalton. And he's not completely true to the book, true to the spirit of the book.

I did like Ruth Wilson as Jane Eyre. I  thought she did a good job in her role as Jane. But I'm not sure I like her better than Zelah Clarke. But she's definitely one of the reasons why this adaptation works so well and has so many fans.

I really liked this version of 'Jane Eyre', although I do agree that they took liberties at times,especially the after-wedding scene! I thought Blanche was really good as well, they captured John Rivers perfectly and Toby Stephens was amazing! Will you be reviewing the 2011 movie?
Juli @ Universe in Words

Juli, I've added the links to my other Jane Eyre movie reviews. I reviewed the 2011 movie on Friday.

You are having so much fun with all the versions, Becky! i want to get this one now......I can't remember if I've seen it or not. I really want to find Timothy Dalton and William Hurt versions first, though, since those are the ones I know I've seen before and enjoyed....Ciaran Hinds as well, even if he is a bit loud, his performance is also truer to the book than many versions, especially in his pride. Does Timothy Dalton rule? I hope to find out! lol

Susan, you're right :) I am having SO MUCH FUN watching Jane ;) The 1983 and 1996 are both good versions. Of course, the 1983 is my personal favorite. But the 1996 is good too. It's tricky to really come to a conclusion because with a few exceptions, there are strengths and weaknesses to each adaptation. And I can not like Ciaran Hinds, for example, but still find the 1997 movie enjoyable because of some of the other performances. I do think Ciaran Hinds looks the role, in some ways. I was reading a section in Jane Eyre that describes him and his temperament, and, I was like...that sounds like Hinds! It doesn't ultimately change my mind, however, because while his yelling is appropriate in some scenes, expected in some scenes, I think he took it a little over-the-top. Mr. Rochester was complex--he had many dimensions to him, and while Hinds is capable of capturing one or two of these, he isn't fully, fully, fully Mr. Rochester. My top two Mr. Rochesters are Timothy Dalton and Michael Jayston. (From the 1983 and 1973 adaptations, both BBC.)