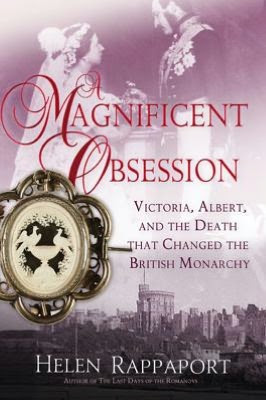 A Magnificent Obsession is a nonfiction book that chronicles the last year of Prince Albert's life--focusing on his work load, health problems, and the tedious family dramas that weighed on him. In great detail it shares with readers what the last few weeks of his life were like, day by day, night by night, who visited him, who nursed him, what he ate or didn't eat, the number of hours he slept or didn't sleep, the bulletins the family released to the press, etc. Readers get a glimpse of what this experience might have been like for his wife, Queen Victoria, and his daughter, Princess Alice, who was his chief nurse. After his death, readers get a glimpse of private and public mourning. The rest of the book focuses on the first ten (or perhaps eleven?) years after his death. It discusses the Queen's private and public life. The way the people felt about the Queen. It focuses on the people's doubts and worries, etc. The book concludes with the Queen regaining some popularity with the people. The last chapter, unfortunately, goes in a direction I didn't quite care for, but, for the most part I found this one interesting. I wouldn't quite say compelling. Because if I'm being honest, I was curious but not THAT curious. It was informative without a doubt, but not necessarily written in such a way to make it fascinating.

Why didn't I like the last chapter? Well, the way I read the text--this may not have been the author's intent--I felt Rappaport was saying that Queen Victoria was great because her husband died; her husband's death freed her to become the strong, independent, vibrant monarch she could have been or should have been all along. That she only became QUEEN when Albert died, before she was a weak woman, a woman whose reign was weakened by her private life; that being a wife and mother made her a weak monarch or a monarch in name only. That her so-called "obsessive" love (devotion, passion) for her husband made her weak and dependent and pliable. I must not be alone in my interpretation because a Library Journal review reads along the lines that it wasn't until her husband's death that "she was allowed" to emerge as a great monarch. Albert's death is made to be this great thing that transforms Victoria into a great woman. And that talk just bothered me. And I'm almost sure it would have bothered her as well. I imagine Queen Victoria was VERY strongly opinionated, and I'm sure she'd have something to say here.

Read Magnificent Obsession: Victoria, Albert, and The Death That Changed the British Monarchy
© 2012 Becky Laney of Becky's Book Reviews
Posted by Becky at 10:29 AM

Interestingly, I had recently reviewed two books on my blog, written on the same time period, centered around 1857's mutiny, which had altered the course of Indian history, beginning the British rule in India.

I find that Rappaport chooses to write about such interesting subjects!