In June I was able to watch two movies adapted from Dickens' novels.

The first movie I watched was Pickwick Papers. I watched the BBC miniseries done in 1985. It stars Nigel Stock as Mr. Pickwick, Clive Swift as Mr. Tupman, Alan Parnaby as Mr. Snodgrass, Jeremy Nicholas as Mr. Winkle, Phil Daniels as Sam Weller, and Patrick Malahide as Mr. Jingle. To name a few. What can I say about this one? Well, the watching experience matches the reading experience. In other words, I was equally bored and amused. For example, some of the adventures of the Pickwick Club bored me in the book, and they likewise bored me in the dramatization. Not all of the adventures are boring, mind you, some are quite funny--very funny. But don't expect each episode of the miniseries to be oh-so-thrilling or laugh out loud funny. What I found was that the miniseries could be just as charming and delightful as the book. A great example would be the characterization of Sam Weller and Mr. Pickwick. Sam Weller is one of the BEST characters in Pickwick Papers. Once he's introduced into the narrative, it's like a brand new book, a much better book! Same with the drama!!! I don't think it would be an easy role to play either! But Phil Daniels does a WONDERFUL job with it!!! I also think Patrick Malahide made an excellent Mr. Jingle. Here is a character that made me want to boo, hiss every time he made an appearance; he was a true villain. Yet. By the end when he's had a transformation thanks to the mercy of Mr. Pickwick, I am able to believe it. Which really, really surprised me. Any actor that can pull off villainy and repentance must be good, right? 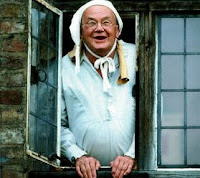 I definitely am glad I made time to watch The Pickwick Papers. There were things that I noticed for the first time in the drama. For example, when I was reading the book, I was so caught up in loving Sam Weller that I neglected the characterization of Mr. Pickwick, I didn't realize how much he changes throughout the novel (and the drama). I was so busy laughing with Sam Weller that I missed the heart and soul of a great man, Mr. Pickwick. It is something that I probably would have caught if I had revisited the novel too--but I'm glad I don't have to wait that long. (While I do plan on rereading Dickens, I hope to read every novel at least once before I start indulging in rereads.) 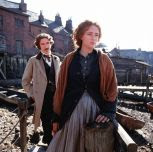 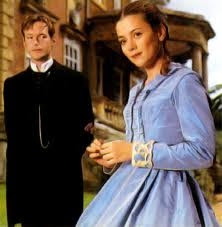 The second adaptation I watched was Our Mutual Friend (1998). Our Mutual Friend is my favorite, favorite, favorite Dickens. I just LOVE the book so much. In fact, if I was tempted to reread Dickens, Our Mutual Friend would be the one I'd most want to indulge in. I just love, love, love Lizzie and Bella and John and Eugene and Mr. and Mrs. Boffin. So I was very, very happy to watch this film. It stars Keeley Hawes as Lizzie Hexam, Paul McGann as Eugene Wrayburn, Anna Friel as Bella Wilfer, and Steven Mackintosh as John Rokesmith. (I recognized "Bella" from A Midsummer's Night Dream and Pushing Daisies. I recognized "Lizzie" from Wives and Daughters and Under the Greenwood Tree. I recognized "John" from The Muppet Christmas Carol.) So was this film giddy-making? Yes and no. It was giddy making except for when it wasn't. The romantic stories following the two couples could be pure giddy-making at times. I just LOVE, LOVE, LOVE both couples (Lizzie and Eugene; Bella and John). But there were many dark elements in this one. Some very dark, very creepy, very unpleasant elements in this one. For example, Silas Wegg (played by Kenneth Cranham) and Mr. Venus (played by Timothy Spall, whom I recognized from Oliver Twist and Enchanted) were faithful to the book (as far as I can recall) but not exactly thrilling. I do think David Morrissey did a fantastic job of being Bradley Headstone!!! Generally speaking, I think this was a wonderful, wonderful production. Thought it was really well done, thought the portrayals were just about perfect. And I loved so many scenes in this movie!!!