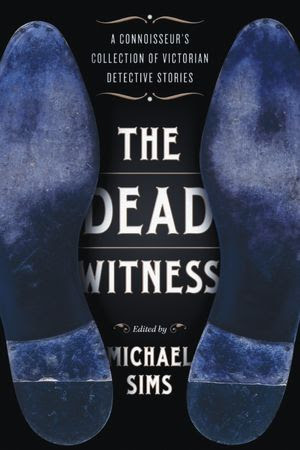 The Dead Witness is a short story collection that I absolutely LOVE, LOVE, LOVE. Now I am not usually a short story person, I feel it's important for everyone to know that. There are a couple of authors whose short fiction I enjoy, but, for the most part I like my novels.  But. I just LOVED this collection. I think it is a real MUST-READ.

Readers are introduced to twenty-two authors and twenty-two short stories. Each introduction was written by Michael Sims who did a fabulous job. There's just enough in each introduction to make you curious and eager to read their work, some of the introductions tease more than others. For example, they mention other stories, other novels, etc. The introductions are anything but boring! The authors presented are English, American, Canadian, Australian, and French. The collection includes men and women authors and men and women detectives! Some were narrated by a man or woman who just 'accidentally' got involved in the case, who just happened to put the clues together to solve the mystery. Others were narrated by amateur and professional detectives. (For example, The Diary of Anne Rodway is narrated by someone who just happens to become involved in this mystery. Her good friend, her roommate, is killed. She feels it was murder and has a clue or two to go by.)
Chances are you're familiar with some of these authors. But some of these will probably be as new to you as they were to me.


My favorite favorite story was "The Diary of Anne Rodway," which I just LOVED and ADORED. True, I was already familiar with his work, but, even if I hadn't been, I think I would have loved this piece. The short story is a series of diary entries by a young woman, a poor woman. She's good friends with another young woman, Mary Mallinson. The two are in similar situations--in a way--both poor, both working hard to survive, both in love but facing obstacles to their happiness. But when Mary is murdered, Anne Rodway takes it upon herself to try to solve the mystery and discover the identity of the man who killed her friend.

I also enjoyed "The Secret Cell" by William E. Burton first published in 1837--several years before Edgar Allen Poe's oh-so-famous detective story, "The Murders in the Rue Morgue." I personally preferred The Secret Cell. I read that this is the first time it is being republished since its initial publication which I thought was nice! The Secret Cell is the story of a missing woman. The narrator had a laundress who had a daughter. The daughter of the laundress became a companion to a wealthy woman, the wealthy woman favors her companion in her will, and when the daughter inherits a fortune, well, it's not long before she turns up missing. It is a very interesting story!

Other favorites include, "The Murder at Troyte's Hill" by C.L. Pirkis, "The Angel of the Lord," by Melville Davisson Post, "The Stolen Cigar Case" by Bret Harte, and "An Intangible Clue" by Anna Katherine Greene.

Read The Dead Witness
© 2012 Becky Laney of Becky's Book Reviews
Posted by Becky at 7:57 AM