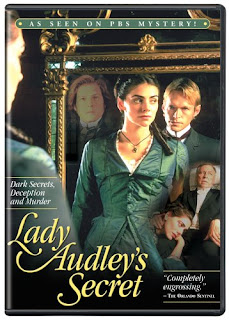 I recently watched an "adaptation" of Lady Audley's Secret. How much does the movie have in common with the book? Well, I could be generous and say ten percent--maybe even fifteen percent, but, essentially NOTHING. True, the movie shares a title with the book. True, the movie features characters called: Michael Audley, Alicia Audley, Lady Audley (Lucy Graham), Robert Audley,  George Talboys, and Phoebe and Luke Marks. As does the book. True, Lady Audley has a secret or two. But that is where the similarities end. For the most part.

Perhaps the BIGGEST difference between the movie and the book is in the character of Robert Audley. Other than his first name being Robert, and his last name being Audley, you can just assume that the movie version is completely different--and by different I mean OPPOSITE. Well, technically I guess both Robert Audleys are nephew to Michael Audley. But as far as character, personality, morals, motivations, intentions, and actions go, they are about as opposed as they can be.

If I had to describe the Robert Audley from the movie, I'd say he was lusty, vengeful, and a complete jerk. He LUSTS after his uncle's wife, Lady Audley, something so far removed from the book it is almost impossible to believe that the people responsible for this movie even read the book--did they even own a copy? He doesn't just lust from afar, he goes about grabbing her and kissing her. And then there's the whole sneaking up and watching her in a state of undress through a slightly-open-but-mostly-closed door, her private room. A place he had no business lingering in the first place. Never mind him just happening to find the door that way. And then the way he turns around and kisses Alicia when she discovers him---DISGUSTING. In the book, Robert was equally indifferent to Alicia, who did want him to propose one day, and to Lady Audley. He definitely wasn't chasing after Lady Audley trying to convince her to run away with him! And while it is true that Lady Audley tells her husband that she thought it was unwise to have Robert around just because he might accidentally fall in love with her instead of Alicia, it was a tactic on her part. She wanted him out of the house, she wanted him out of the neighborhood. This Robert--the movie Robert--is not exactly indifferent to Alicia, he leads her to believe that they will be married. You can't mistake words like "will you marry me?" So Robert just appears to be a JERK (to put it very nicely) to Alicia.

George Talboys. Poor George. So little screen time, and what time you were on screen, well, Robert your dear friend, was more interested in Lady Audley. How were viewers to ever guess that your relationship with Robert actually mattered? That your friendship with Robert actually was the motivation behind almost all of the novel after your mysterious disappearance?! No, poor George, you didn't enter into Robert's thoughts at all, hardly. It would have helped things, perhaps, if the movie-Robert had bothered to track down your family, to share his convictions, to meet your father and sister. It would have perhaps shown that Robert just wasn't OBSESSED with Lady Audley instead of Lady Audley's "secrets."

Does motivation matter? Is it so very, very, very important that Robert investigate the disappearance of his friend George because he loved George, that he wanted justice for his friend, that he sincerely thought something horrible had happened and he needed answers? I think so. When you make Robert's sole motivation lust, anger, and vengeance--if Lady Audley won't give herself to me, if she won't betray her husband for a passionate affair with me--then I'll go about ruining her life, I'll piece together clues to make sure she never has a happy day in her life--then Robert is a VILLAIN. He's a guy you want to boo, hiss. Who could ever LIKE this Robert Audley? Who would ever see him as a hero?

Would this movie be more satisfying if it wasn't trying to be an adaptation from a book? I'm not sure. Maybe.

Ouch, this sounds terrible! Why piggy-back on a famous book if you're not at least going to follow it properly? There's artistic licence and there's cruelty to the classics. This certainly sounds like it falls into the latter category.

The whole point of Robert's character is his friendship with George (which, frankly, seems more than friendship!). Robert's essentially a decent man who doesn't really want a career or to get sucked into the lives he sees other people having. He's attracted by Lady Audley, yes, but he's not the kind who would contemplate trying to betray his uncle.

You're right - they looked at the book cover, read a plot summary and tried to fit it into a film!

That sounds horrible! Robert's my favorite. ::(((