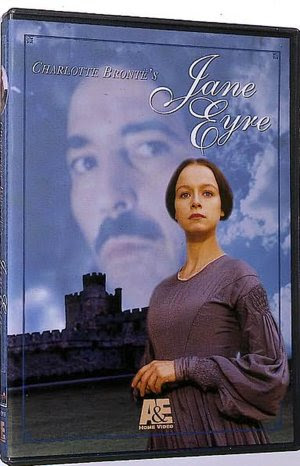 For example, in this adaptation, Jane does NOT learn that the Rivers are her cousins, and she does NOT inherit the money from her dead uncle. Rosamond Oliver and Mary Rivers have both disappeared from this adaptation. But how important are the Rivers to the story as a whole? Do people love Jane Eyre because she runs away and spends time with cousins she didn't even know she had? Or is the romance itself most important to readers and viewers?

Another example, in this adaptation, Jane does leave Thornfield Hall to visit her dying aunt, but, if you blink you'll miss it. Because within seconds of her leaving she's returned. We're told she spent a month there, but, we don't see a minute of it. You have to ask yourself if you love Jane Eyre because of those scenes, that time spent with her dying aunt, and her Reed cousins, or do you love Jane Eyre because of the main story with Mr. Rochester and his mad wife.

As for Ciaran Hinds, well, it's hard for me to say. For one thing, a couple of his scenes made me want to cringe. Truly. I did not like the way he portrayed Mr. Rochester. There were a couple of scenes I thought he was TOO angry, TOO violent, TOO forceful, TOO scary, TOO intimidating, TOO dramatic. Particularly the oh-so-crucial after-the-non-wedding, post-big-reveal scene. His temper tantrum is just so out of character. He's way too physical, too physically abusive--bordering on it anyway. And the whole scene just makes me cringe. That is NOT the way it's supposed to go, that is NOT how it was handled in the book.

And at times I felt Hinds' Mr. Rochester was not dimensional enough, sure, he got a few of the emotions down, but, did he capture the full complexity of Bronte's hero?! I'm not sure he did. Also, on a more personal note, the mustache and sideburns bothered me. From certain angles, I kept seeing Tennessee Ernie Ford. (When I wasn't thinking of this animated villain.)

Was this adaptation faithful when it comes to portraying the relationship between Jane and Edward? I think it was. I think the dialogue between them worked. I think many of their scenes were faithful to the book--for the most part.

I thought this was a very comfortable Jane Eyre to watch. It was just around two hours. You could sit and watch it comfortably all at once. Yes, it condensed things, yes, certain things were missing from this adaptation. But it made sense, it flowed smoothly. I found many, many things delightful about it. I enjoyed many of the scenes, of course, I had issues with a couple of scenes. I didn't particularly love the first meeting between Jane Eyre and Mr. Rochester, I thought it was way too dramatic, definitely over-the-top. But other scenes made up for it, in my opinion.

I did think the film did a good job creating ambiance--at capturing the gothic elements of this one. There were scenes that captured the mystery, suspense, and horror of the original.

I thought Abigail Cruttenden brought something unique to Blanche Ingram--for better or worse. In this film, she was portrayed sympathetically, or more sympathetically than in other adaptations. While we're still told that she was mainly after Mr. Rochester's money, she's not portrayed one-dimensionally as vain and haughty. While she may not be exactly friendly towards "the governess." She doesn't come across as mean and deserving of what she gets. (That is Mr. Rochester using and manipulating her, leading her to believe one thing, but in all truth just trying to make Jane jealous.) Is that a good thing? Well, I suppose that depends on your perspective. Would a nice Caroline Bingley work in Pride and Prejudice? Are people so determined to not like Blanche Ingram that this slightly modified Blanche would offend? I'm not sure.

St. John Rivers is likewise portrayed sympathetically. He doesn't come across as offensively as he does in other adaptations. He actually seems quite nice, quite pleasant, as someone who actually has people-skills.

Have you seen this adaptation? What did you think of it?

I do think it is crucial to see how Jane interacts with her cousins and especially with her aunt when she returns to her. It shows the strength of her character and lifts her above the stereotype of girl falls in love with rich older man.

I do think a nice Ingram Blanche would work because I think the novel also comments on the role of women in society. And whereas Jane seems a victor because she decides her own destiny, Blanche is very much a victim, I think, and therefore the audience could be sympathetic with her!

Thanks for sharing, I am loving your weekly Jane Eyre reviews XD
Juli @ Universe in Words

Juli, I tend to agree with you. Jane's transformation is best seen perhaps through her visits to her dying aunt and to her Rivers cousins. It shows her compassion, resilience, determination, independence, strength. In particular, if she was not confident and sure of who she was, she could have been bullied or dominated by St. John Rivers. He doesn't "get" who she is, who she really is, but she knows herself, she knows that it is important to be true to yourself. And Jane is a woman who knows that she deserves to be treated well, that she is worthy of love, that she doesn't have to settle for St. John because "she was not made for love, but for labor." She is a wiser woman now.

I couldn't agree more! And because she becomes wiser, her relationship with Rochester becomes more equal and true, I think.

I started to read Jane Eyre but had trouble with it. Got stuck along the way. My favorite still remains Pride and Prejudice. Mr. Darcy has to be one of my favorite characters. Love the novel and the movies :)

I'm a fan of Ciaran Hinds, but I totally agree with you about his portrayal of Mr. Rochester. When this first aired my friend and I were making fun of his constant scene-chewing, especially in the post-wedding scene. "So typical, Jane!"

I do think Samantha Morton was one of the best Janes I've ever seen, though. She looks plain enough to be believable as Jane, but she doesn't act meek or boring like some actresses do in the role.

I loved this movie version of the book too. You are right, Ciaran Hinds is a bit harsh in his portrayal. but I like him, so I will overlook it this time. ;)

Juli, I agree! I think the romance is better *when* they come back together as equals. Some movie versions get this right, others don't quite catch Jane's transformation.

Megan, I like P&P too! Not as much as Jane Eyre perhaps. But I love Jane Austen!!!

Tasha, I agree. Love Samantha Morton in this role!!!

Beckie, I like him in other roles better. I really wish I could say I loved him in this one though.