The Yard (with slight spoilers) 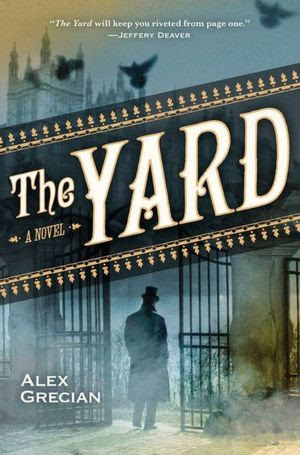 From the prologue: Nobody noticed when Inspector Christian Little of Scotland Yard disappeared, and nobody was looking for him when he was found.

What can I say about Alex Grecian's The Yard? I was disappointed. If you're expecting a mystery where suspense builds, clues are given, and you're on the edge of your seat to find out who did it, then this one will definitely disappoint. For Grecian will reveal who did it to readers within a chapter or two. Readers will get a behind-the-scenes look at the murderer almost from the beginning. The first entry or so of this murderer his identity is still hidden, but, that doesn't remain the case for long. But Grecian doesn't just reveal the identity of one murderer, he reveals the identity of another murderer. For Scotland Yard is working on two cases during the course of the novel. One, a murderer who is killing police detectives. Two, a murderer who is killing bearded men.

The Yard has multiple narrators. Readers meet several detectives (some remain alive at the novel's end, others aren't so fortunate) throughout the novel, each contributes (to a certain degree) to solving one or the other cases. Some personal details are shared about some of the detectives. For example, readers meet Walter Day and his wife. We get a flashback to before they were married--we get to see the proposal, and, it felt to me it was a very odd proposal! We also see glimpses of their home life as she adjusts to life in London. Another detective we meet is Hammersmith (I can't recall his first name). We get flashes from him as well, including flashbacks to when he was a child. His flashbacks reveal his sensitive side and how difficult the job can be: finding the bodies of children, men, women, etc. Readers also meet Dr. Kingsley who works closely with Scotland Yard, and we meet his young daughter who helps out by sketching all the corpses. While we meet many characters, including a mystery "dancing man", I had a hard time truly connecting with any of the characters. I'll explain, while I wanted to read the book to its end, I wasn't at the edge of my seat. It wasn't that the book was super-compelling and impossible to put down. It wasn't that the book had any suspense (well, readers could perhaps wonder if Fenn would make it back home alive or if he'd end up a corpse; and if you're desperate to find more to be in suspense about I suppose you could wonder if Day's wife was ever going to tell him that she was pregnant), I finished the book because I like to finish what I start.

I think some of the scenes were intentionally put in there to aggravate modern readers--which worked, by the way. Having scenes where a boy goes up to a police officer (detective) and clearly states things like, help, please help me, I've been kidnapped, tied up, held prisoner, I only now just escaped, if he catches me again, I don't know what will happen, please help me find my parents. And have him respond with, move along, boy, or I'll send you to the workhouse. I suppose the intention being to highlight that women and children had no value or worth in society.

I wanted to like this one, I was even hoping to love it, but it was just okay.

I have this from the library. I still want to read it, but mysteries where it's obvious who dunnit is one of my pet peeves.