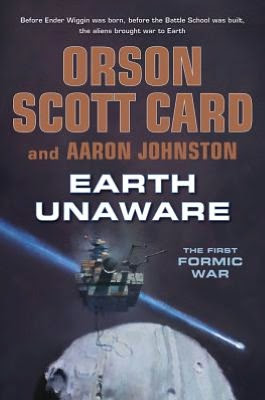 Victor didn't go to the airlock to see Alejandra leave the family forever, to marry into the Italian clan.

Earth Unaware is an experience. Orson Scott Card is as wonderful as always. In fact, I'd say this may just be my most favorite Card novel of recent years. His characters are so incredibly human, so very, very flawed. Because of their complex relationships with one another, there is a genuineness to them. That doesn't mean readers will connect with each and every character. In fact, this novel has a character I loathe more than any other Card creation: Lem Jukes. Since this novel rotates narrators (or main characters), every Jukes chapter was painful. I was just SO VERY VERY VERY ANGRY at him. I reacted very strongly to him. But that isn't really a big surprise. I reacted strongly to so many characters in this one. Major and minor characters that I just CARED for. Which made almost every loss something to be FELT.

There are essentially "three" big stories being told in Earth Unaware. Two of the stories happen in space. El Calvador is an asteroid mining ship--a family-owned free mining ship. Victor's story, for the most part, occurs on El Calvador. This is the ship that first spots the Formics; well, they are the first to notice that an alien ship is heading towards Earth at faster than light speed. Lem Jukes is captain of a corporation ship. His interest in asteroids isn't quite like El Calvador's. Jukes is working on an invention with a lot of potential--something having to do with a gravity laser. After a successful test or two, he's ready to try the glaser on a bigger object. The object he has in mind happens to be the asteroid that El Calvador is mining at the moment. He decides to "bump" them--destroying their laserline communications--long range communicator--in the process.

The third story is, in a way, the lesser of the three stories. It is set on Earth and involves the military. It centers on a man, Wit O'Toole, forming a special military unit, Mobile Operations Police. One of the recruits is Mazer Rackham. But this isn't his story just yet. He's still undergoing testing, at this point. And the war has not begun. So while he will be very important in the other books in this series, this isn't his time just yet.

Earth Unaware is an exciting, suspenseful science fiction novel. I found the pacing to be just right. (True, some of the chapters seemed like a bit of an interruption, especially close to the end, but for the most part, the book was incredibly INTENSE, painfully INTENSE.) Readers learn about the ship who first spotted the Formic ship--the alien ship. Readers witness the destruction of the first encounter between humans and Formics. And anxiously readers wait and hope that one of the ships who know about the coming aliens will be able to send news to Earth.

This was an incredible reading experience--very emotional. It's a novel to be felt as well as read. The characterization was great. The storytelling and pacing was great too. I just loved it. This is one I'll definitely want to reread.

Great review! I loved Ender's Game, maybe I will consider reading this.

Totally agree the MOPs plot was kind of plot leftovers, but I'm sure it'll be more important in future books.

(I had to wait to read your review until I'd finished the book, though I clicked through a couple of weeks ago so you'd be in my browser history.)