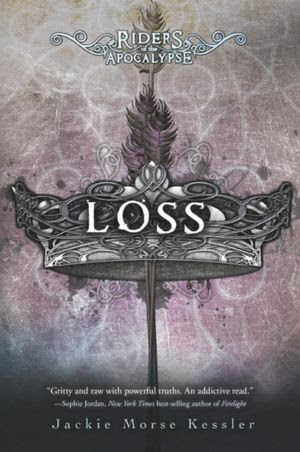 The day before Death came for Billy Ballard...
...Billy was on the ground, getting the snot pounded out of him. Again. No special reason this time; maybe it was because it was Tuesday, or because Eddie Glass didn't like Billy's hair.

This is the third novel in Jackie Morse Kessler's Riders of the Apocalypse series. The first two books are Hunger and Rage. Hunger was a novel about a young teen girl with an eating disorder becoming Famine; Rage was a novel about a trouble teen girl, a girl who cuts herself, becoming War. The third novel is about a GUY who has spent years of his life being bullied becoming Pestilence. (For the record, the books do stand alone; you don't need to read them in a certain order; each book is about a different Rider of the Apocalypse.)

The hero of Loss is Billy Ballard. And he's going to have to become confident in the role of hero fast if he's going to stand a chance at saving the world from self-destruction, at stopping the end of the world. He's going to have to face what is troubling him--everything that is troubling him. At home, he's having to deal with a grandfather with Alzheimer's disease. Every room, every window, must be locked. And the front door itself must be "hidden" so that the grandfather can't escape and get lost and cause problems. Soon after the novel opens, readers see what happens when the Mom is careless when she comes in from work. The two are soon rushing through the streets, yelling as they search, needing to find him before something horrible happens. And that something horrible does almost happen--but Billy is there just in time. It was the closest of close calls. And it makes Billy "a hero" in the eyes of his best friend, a girl Billy wishes was his actual girlfriend. But. Billy feels silly thinking himself a hero when he's too scared to go to school, too afraid to go to his classes, his gym class, his locker room. He spends his life dreading every moment he's out of the house; considering what his home life is like--taking care of a grumpy, sometimes-violent grandfather who does not remember him, does not love him, does not want him around--that is saying a lot. But everything changes, everything goes topsy-turvy, everything becomes surreal when Billy is greeted by Death and given the Bow of the Conqueror, of Pestilence. Billy has a chance to wield power, destructive power. But he doesn't necessarily have to do it recklessly or irresponsibly.

Loss will best work for readers who don't require their fiction to make sense 100% of the time. In other words, for those that can accept a certain flowing ever-changing magic-realism, poetical, fantastical dream-state. While Billy does interact in the real world after assuming his bow and the 'office' of Pestilence, most of it does occur in Billy's mind. The imagery and allusions are powerful, in a way, and are incredibly creative. But. At the same time, it didn't quite work...for this reader. It was not quite my personal style.

Though the author uses some biblical imagery in these novels, the whole concept of the (four) riders of the Apocalypse, I can't say that the books are ever faith-friendly. In particular, this book has bothered me more than the others. True, it has been a few years since I've read them, and true, it's possible that I didn't just mention it in my reviews. In general, my philosophy is that I don't expect books to "be biblical" or to meet certain moral standards if they're obviously secular or mainstream. (If, like in Irises, they have characters that profess faith, then, that's somewhat different.) Loss is definitely, definitely a secular book. Yes, it may be using imagery from Revelation, but not in a biblical way. The viewpoint is not biblical. I found it disturbing--actually extremely offensive--when the author has "the Conqueror" say twice:


"Death is in all things," the Conqueror continued, babbling now, his words like wasps in Billy's ears. "He is the alpha and the omega, and we exist only on his whim. And he is done with whimsy!" (229, 243)

The novel also holds an unbiblical view of good and evil. In Kessler's novel, for example, and it won't be the first or last time this is done, I know, but good and evil are presented as equal, equal in terms of strength and power and forces and influences. Both good and evil being in eternal opposition forever and ever and ever without end. Neither good nor evil being able to overcome the other. The war between the two resulting not in their losses exactly, but in human losses.

Personally, I liked the first two books better than this one. I think this one is the weirdest one; I think it requires the biggest stretch to suspend your disbelief. I think it takes the most work to understand the surreal storyline which occurs mainly in a weird dream-memory-mind state.