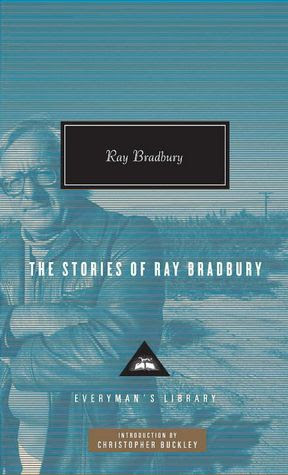 A few years ago I made a good attempt to read The Stories of Ray Bradbury. This collection of short stories is over 1,100 pages!!! I did manage to read just over 400 pages. But. It wasn't until his death that I decided I really needed to make a second attempt. Here are the three posts that cover the first attempt: first twelve, next twenty-six, next three.


He remembered how carefully and expertly Grandmother would fondle the cold cut guts of the chicken and withdraw the marvels therein; the wet shining loops of meat-smelling intestine, the muscled lump of heart, the gizzard with the collection of seeds in it.

My thoughts: While this one wouldn't normally ever be listed among my favorites, viewed solely in terms of the ten stories I'm sharing today, it would probably be among the best. It is creepy, odd, and the details are, well, disgusting. But it actually made sense, a twilight zone kind of sense, but sense. You knew what the beginning, middle, and end all meant. As for what it is about, well, let's just say something not quite human moves into Grandma's boarding house, and, Douglas, the young hero of the story, sees it for what it is.


They stood in the blazing sunlight for a long while, looking at the bright faces of their old-fashioned railroad watches, while the shadows tilted beneath them, swaying, and the perspiration ran out under their porous summer hats.

My thoughts: This one would be among my favorites--viewed solely in terms of this ten. This story is about two men who try their very best to warn a cranky old woman to watch her attitude. Why? Well, they know HOW VERY HOT it is, and how the heat is getting to everyone, and they have a theory that 92 degrees is the perfect degree for murder.


More murders are committed at ninety-two degrees Fahrenheit than any other temperature. Over one hundred, it's too hot to move. Under ninety, cool enough to survive. But right at ninety-two degrees lies the apex of irritability, everything is itches and hair and sweat and cooked pork. The brain becomes a rat rushing around a red-hot maze. The least thing, a word, a look, a sound, the drop of a hair--and irritable murder. Irritable murder, there's a pretty and terrifying phrase for you. (422)

Will she listen? Will the thermometer make it that fatal degree?


Martin knew it was autumn again, for Dog ran into the house bringing wind and frost and a smell of apples turned to cider under trees.

My thoughts: Not a favorite, but it gets worse. Martin LOVES his Dog because Dog always brings back visitors to visit Martin. He does have a favorite visitor, Miss Haight. When Miss Haight dies, Martin gets lonely, then, Dog disappears too...will he ever get visitors again... This one is creepy, and would be perfect for the R.I.P challenge, and it does still make sense. It's a creepy story that won't necessarily be for everyone. But I still knew what happened in it.


It was one of those things they keep in a jar in the tent of a sideshow on the outskirts of a little, drowsy town.

My thoughts: Didn't like this one. I'm not sure I hated it, but I didn't care for it. Every one sees something different in this jar--one sees a dead baby, one sees a dead kitten, one sees a dead jellyfish, etc. So what is really in the jar? Well, no one knows...for sure...and would knowing be a good thing or a bad thing?


Just when the idea occurred to her that she was being murdered she could not tell.

My thoughts: For the first two or three pages, I thought, well, this might be a good companion piece to "The Yellow Wallpaper." A few more pages, and I thought THIS IS THE WORST STORY EVER. I seriously hate this one. HATE, HATE, HATE. It is about a woman who thinks her newborn baby is trying to KILL her. I won't spoil this one, I won't. But believe me it is AWFUL.

"The Next in Line"


It was a little caricature of a town square.

My thoughts: I'm not sure I understood enough of this one to actually hate it. I'm not sure if it's just unreliable narrators at work, if there's a thread of insanity at play, or, if it's meant to be one of those bizarre Twilight-Zone type stories where there is no explanation, but, by the end of the story I was very confused and a bit annoyed. It appears to be about a couple on vacation in Mexico, and the woman keeps getting more and more anxious because they seem "trapped" in this town--their car broke down and the mechanic is supposed to be fixing it.

"Jack in the Box"


He looked through the cold morning windows with the Jack-in-the-Box in his hands, prying the rusted lid.

My thoughts: Does this story make sense to anyone? Am I the only one who is confused? This story is 90% nonsense, the only paragraphs that make sense are the last two or three. The only thing that has changed is the narrator--we go from a child to an outsider adult perspective. But I couldn't say exactly what this one is about.


She was a woman with a broom or a dustpan or a washrag or a mixing spoon in her hand.

My thoughts: I liked this one. It's not that I love it exactly, though it is perhaps the most normal, most sane of the ten I'm discussing today. This story is about the death of a great-grandmother and how she gathers her family around her, talks to them, passes along words of wisdom, and welcomes death.


She came out of the bathroom putting iodine on her finger where she had almost lopped it off cutting herself a chunk of coconut cake.

My thoughts: I believe this one is supposed to be a comedy! I certainly read it that way. A rivalry gone wrong between two women who want to be president of the same club. One woman, the narrator, is the clumsiest woman in town. She's accusing her neighbor and fellow club-member of being a witch and using witchcraft to keep her from winning the election. (She always has only one vote--her own.) She also writes out a list of every "accident" and illness she's had in the past year. (She totals it all up and says that this other woman is responsible for $98 worth of medicine.) No one is taking her seriously, which, is a good thing I suppose. It ends in laughter and tears.


On Sunday morning Leo Auffmann moved slowly through his garage, expecting some wood, a curl of wire, a hammer or wrench to leap up crying, "Start here!" But nothing leaped, nothing cried for a beginning.

My thoughts: The story of a man obsessed with building a "happiness machine" doesn't realize that happiness is made of of small passing moments, that happiness isn't something that you can program into a machine, it isn't something that can be bought or manufactured. He is driving his family--particularly his wife--CRAZY with his obsession to build this machine. He just doesn't get it...will he ever?

I wonder if Bradbury's stories are better in smaller doses. I really enjoy them, but he does have a specific style. I wonder if it would become tiresome.