The Far Side of the Sky 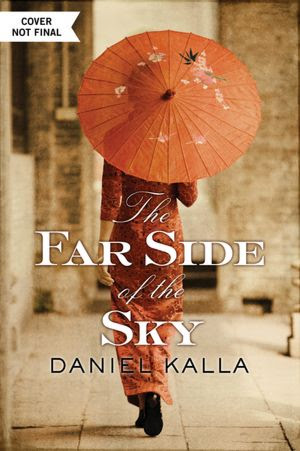 The shadow still swayed over the pavement. Franz Adler tried to blink away the memory of his brother's dangling corpse and the silhouette it cast across the sidewalk, but the image looped over and over in his head.

The Far Side of the Sky provides a unique look at World War II. Franz Adler is able to flee Vienna, Austria, after Kristallnacht with his young daughter, Hannah, and his sister-in-law, Esther. Also accompanying them is an artist Ernst Muhler who fears persecution as well. (He joins them at the very last minute when his boyfriend decides to join the Nazis.) Their destination is Shanghai, one of the few places welcoming Jewish refugees.

The Far Side of the Sky is about the Jewish refugee community in Shanghai. Readers get glimpses of refugee life in 1938-9, 1940, 1941, 1942. (For example, the narrative might cover one or two months in a given year, and then jump to the next year.)

The main characters are:

Franz Adler, a Jewish doctor who divides his time between two hospitals in Shanghai, one of the hospitals is for Jewish refugees.

Soon Yi Mah (Sunny) a biracial (American/Chinese) nurse who divides her time between two hospitals. Her father was a doctor, and, she too has a gift for doctoring. But Dr. Reuben, one of the surgeons at the other hospital absolutely hates her and feels she doesn't know her place. She's intelligent, resourceful, courageous.

Of course there are dozens and dozens of minor characters of many ethnicities.

The story was very fascinating. The author note reveals that much is based on fact, that he spent a great deal of time researching the Jewish refugee experience in Shanghai. And since this was the first I've heard of it, it was definitely fascinating to me. However. I was disappointed in the distant characters. Though readers follow the stories of these characters, I personally never felt connected with them. I knew enough about them to care about their fates, what happened next, etc. But I never felt like I knew them.

I'm not sure this book did a good job with relationships between characters either. For example, readers know that Franz is a father, but, except for two or three scenes, we don't really see Hannah interacting with Franz. We know that Hannah provides motivation for Franz--that his concern for Hannah moves the plot forward, but as for knowing Hannah, that just doesn't happen. We don't get the details of his personal life outside the hospital very often. Again, we know that Franz is taking care of Esther, his sister-in-law, but as for his sister-in-law having any character of her own, I just don't see it. There are a handful of scenes now and then. But even in those scenes she seems one-dimensional and just there. So many of the characters seem one-dimensional. The story itself is fascinating enough--the action, the danger, the uncertainty--but the characters just don't seem to match that.

The setting is unique and interesting. The story is fascinating and compelling. The characters, well, they disappointed me. But. I think there is enough to enjoy this one that I'd definitely still recommend it.

Read The Far Side of the Sky

Very interesting, I've never heard of the Jewish refugees in China either. I wonder if there were any parallel experiences to what is portrayed in The Flowers of War (ft. Christian Bale). Great review.

Glad to see you enjoyed it. I loved it and didn't have any issues with the character development. However, I agree that Esther wasn't as well developed as the others.