Sunday Salon: Watching He Knew He Was Right

I could gush on and on about He Knew He Was Right. This adaptation of an Anthony Trollope novel is practically perfect. It is both true to the book and completely delightful all on its own. Meaning that you don't have to have read the book in order to enjoy it completely, though, after watching this one you may want to pick up the book! I know watching this one made me want to reread the book!!! 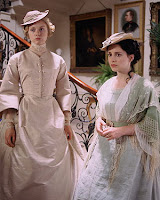 So what did I love about this one? I loved that it was true to the book. Now, I've read here and there that this movie is flawed because the subplots are supposedly more interesting than the main story line, that there is something wrong with this movie because viewers care more for the minor characters than the major ones. I disagree. Here's why. This would only be a problem or a flaw IF the movie gave more screen time to the minor characters (Nora Rowley, Hugh Stanbury, Aunt Jemima Stanbury, Dorothy Stanbury, Brooke Burgess, Reverend Gibson, Camilla French, Arabella French, Mr. Glascock, etc.) than Anthony Trollope devotes to these same characters in his novel. If you've read the book, you KNOW that Anthony Trollope spends a great deal of time with these characters. In particular, he gives GREAT attention to both Dorothy Stanbury and Nora Rowley.

These two young women receive equal attention to Emily Trevelyan. The successful romances of Nora and Hugh and Brooke and Dorothy provide contrast to the unhealthy deteriorating romance of Louis Trevelyan and Emily. Viewers see--briefly see--the romance between the "main characters" of Emily and Louis. But except for the first few minutes and the last few minutes--these two are anything but happy and together. The obstacles for this couple all occur after the wedding, after the honeymoon, after the birth of their son. In fact, he's a toddler when the problems begin. Essentially, I see Emily and Louis as one story line, true, but not necessarily the "main" story line. The other story lines receive equal time and attention in the novel, and, it is only fair that they receive the same amount on screen. I don't think Trollope thought in terms of "major" characters and "minor" characters. Not the way we do. I think there is enough depth and substance in his characters that even so-called "minor" characters feel real and interesting. 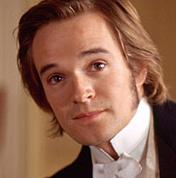 Thoughts on the Main Story. Viewed solely in terms of the "main" story, the break down of a marriage, the nervous break down of a man, Louis Trevelyan, the story is truly tragic. Here we have a happy home torn apart, broken and divided. And why? Because of one man's insistence that he is right, that his perception of reality is the only right perception. That what "society" thinks is ultimately more important than anything else. In other words, if one or two busybodies from "society" think that there is something immoral in Emily receiving visits from her godfather--her father's so-called oldest and dearest friend, then without a doubt it MUST be true. His reasoning is fuzzy at best, jumping from one vague notion of 'it's not quite proper' to 'my wife is committing adultery' very suddenly. If you look for logical reasons as to why he'd assume the worst, you won't find them. Now, does this mean Emily is perfect? No. Here's why I think she should be held partly accountable. I think that at the very, very, very start, she could have done more to ease his mind. But she was angry and resentful of the implications and responding in turn. There were small things she could have tried to make peace with her husband, and while it's true her pride would have suffered a little here and there, in the end, it might have been worth trying. But that is complete speculation. The truth is that it is hard to pinpoint exactly where Louis started losing his sanity. Now this is all sad and tragic enough, I suppose, but for me the REAL tragedy of this main story line is seeing what this break down does to their son. Seeing two adults battle for possession of their son. Seeing the injustice of the times. It was a POWERFUL moment to see Emily lose her son--he was kidnapped by her husband. There was absolutely NOTHING she could do to get him back in her custody. Her husband had all the rights--no matter who was right or wrong, no matter who was better fit to be a parent, no matter the father's questionable sanity. He didn't want his wife to have custody, he didn't want her to be able to see her son, he didn't want his son to love his mother, he wanted to hurt her deeply so he took away what she valued and loved most in the world. If people prefer the subplots to the "main plot" it may be because they prefer romance and comedy to tragedy. For those that are looking for tragedy, for commentary on society, this main story will satisfy.

Here are how the subplots are connected. Louis has a best friend, Hugh Stanbury, and Emily has a younger sister, Nora. The two are often together because they spend a lot of time with Emily and Louis. The two already are in love when the movie begins--though he's not officially spoken or declared his love for her. She feels something for him, he feels something for her. And it is only his lack of status that is keeping him from asking her to marry him. When Louis separates from his wife, he sends her to the country. Emily, Nora, and little Louis stay with Hugh's mother and sister...introducing viewers to part of Stanbury's family.

Hugh has another sister, Dorothy, who has recently become a companion, to Aunt Jemima Stanbury. She is a CHARACTER and then some!!! Jemima wants to do something for Dorothy because she does like her and wants to see her well-settled, so she tries to get Dorothy to marry Reverend Gibson. While Gibson, at first, seems willing, Dorothy, however is not. Gibson is being pursued by the French sisters, Camilla and Arabella. Dorothy's heart belongs to Brooke Burgess, a young man who comes to visit Aunt Jemima. (He's also friends with her brother, Hugh.) Brooke and Dorothy love each other very, very much. But Aunt Jemima thinks that she should have some say in who marries who. Love, courtship, and marriage are definitely important themes in each of the sub-plots. From the obsessive, jealous love of the French sisters for the same man, Reverend Gibson, which plays out as a comedy. To the forever-and-ever love of Nora and Hugh and Brooke and Dorothy. Both couples definitely have obstacles to face.

There is a richness in Trollope's novel that translates very well in this adaptation.

One other thing I'd love to mention about this adaptation is that I just LOVE the narration. I love how the characters speak directly to the audience, how they look at the camera, making excuses for their behavior.

Watch He Knew He Was Right
Meet Mr. Gibson
Reverend Gibson in a TOUGH moment

I am so happy to find someone who loves Trollope like I do. He is my comfort reading. I read HKHWR last year, then followed it with the video. I also enjoyed the video (though I am not a fan of the direct narration). Aunt Stanhope was delightful, and I came to love Dorothy as well. The Gibson/French love triangle was a good foil to the tragedy of the Trevelyan marriage.

I am working my way through the Barchester Chronicles for the second time (about to start Framley Parsonage). I am also working on Dombey and Son, though I took a break for a Deeanne Gist novel. I also picked up Sixteen Brides on Monday and am on the wait list for the Dead Witness collection.

I found your blog a couple of weeks ago and have enjoyed it so much, also Operation Actually Read Bible. Thank you for your work on them, I look forward to reading them every day!