It lay low down in a hollow, rich with find old timber and luxuriant pastures; and you came upon it through an avenue of lines, bordered on either side by meadows, over the high hedges of which the cattle looked inquisitively at you as you passed, wondering, perhaps, what you wanted; for there was no thoroughfare, and unless you were going to the Court you had no business there at all. At the end of this avenue there was an old arch and a clock-tower, with a stupid, bewildering clock, which had only one hand; and which jumped straight from one hour to the next, and was therefore always in extremes. Through this arch you walked straight into the gardens of Audley Court.

I definitely enjoyed this one! I thought it was a GREAT read. I'm not sure it is a great book, but, it offers entertainment and thrills. I personally liked the writing style of this one, I found it very suspenseful and satisfying. If possible, it's best not to know Lady Audley's "secret" before reading. I'd say avoid reading too much detail about this one. I am going to try my best not to give away any details that are best left as surprises. But I do want to introduce you to the characters... 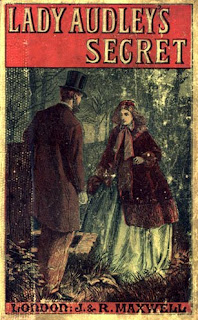 Michael Audley, a widower with a near-grown daughter, Alicia, who falls madly, deeply in love with a younger woman, Lucy Graham, who is employed as a governess by one of his friends.

Lady Audley, a young woman with a secret; It was almost too easy for Lucy Graham to agree to become Lady Audley. He's a rich man, a man with status, and he wants HER, a nobody. Who could say no?! Especially if you don't have your heart set on marrying for love.

Alicia Audley, a young woman too close in age to Lady Audley; she is NOT happy to have a new stepmother. She is not happy that her new stepmother is oh-so-gorgeous and that men seem to see only her. She's also suspicious and distrustful. Granted, she would probably be distrustful of ANY woman in that situation. And the fact that Lady Audley does in fact have a secret shouldn't be taken as proof that she has great instincts.

Robert Audley, a nephew of Michael Audley; Alicia really, really WISHES that Robert would pay attention to her. She really is hoping that he will notice that she is all grown up and ready to be proposed to. When we first meet Robert, you might say that he completely lacks ambition and gumption. In other words, he doesn't do much at all. This doesn't remain the case.

George Talboys, a friend of Robert Audley. He is newly returned to England, he's now got some money. He could potentially have been a very very happy man if he'd found his wife and son alive and waiting for him. Unfortunately, soon after his return, he learns that his wife has died. His son is being cared for by his father-in-law. He's too shocked to really take care of the boy himself, and, he feels perhaps its best not to disturb the boy too much. After all, his mother has died, and the boy's grandfather has been a part of his life from the start.

Phoebe and Luke Marks, Phoebe serves as Lady Audley's maid, Phoebe and her husband are the first to discover her secret.

I would definitely recommend this one!!! This would make a great companion read to The Suspicions of Mr. Whicher by Kate Summerscale, but, do try to read this one FIRST.

Definitely a great read while not being a great book! But the key aspects of fiction - namely enjoyability and thrills - which attracted the Victorians to the sensation novel still hold true for us.

Braddon's also an interesting specimen as a writer. Living with a man she wasn't married to, writing with the flow of events, editing magazines: certainly someone of interest for feminists!