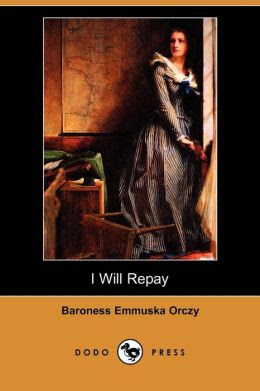 As much as I love, love, love The Scarlet Pimpernel movie adaptations, I didn't quite love the novel. I wasn't quite sure if I wanted to read the sequels. I procrastinated a very long time. But once I decided to actually read I Will Repay, it was a quick read: two days!

What you should know: First, the Scarlet Pimpernel does make an appearance, but, you have to be really, really patient because he is a long time in coming. Second, it is a romantic adventure set during the French Revolution, emphasis on the romance. If you HATE romance, if you hate the drama and dialogue found in romance novels, then this one might not be for you. But. If you do, you're in for a real treat!

The prologue starts ten years or so before the French Revolution. It begins with a "fair" duel between two men. The hero, Paul Déroulède, is a reluctant participant. But the other guy, Vicomte de Marny is not backing down at all, is determined to make the fight to the death, if you will. He dies. His father makes his young daughter promise to get revenge on her brother's murderer. Her name is Juliette de Marny.

Ten years later, Juliette has finally found him, found a way to get close to him. He "saves" her from an angry mob, invites her into his home, introduces her to his family. She remains with him, getting close, for a bit. She begins to develop her plan. Meanwhile, of course, he is falling madly in love with her...


"Gratitude? What have I done?" "You committed a foolish, thoughtless act outside my door, and gave me the chance of easing my conscience of a heavy load." "In what way?" "I had never hoped that the Fates would be so kind as to allow me to render a member of your family a slight service."
"I always meant to tell you," he continued somewhat hurriedly; "for it almost seemed to me that I have been cheating you, these last few days. I don't suppose that you can quite realise what it means to me to tell you this just now; but I owe it to you, I think. In later years you might find out, and then regret the days you spent under my roof. I called you childish a moment ago, you must forgive me; I know that you are a woman, and hope therefore that you will understand me. I killed your brother in fair fight. He provoked me as no man was ever provoked before ..."

Not everyone is charmed by this young woman. And the Scarlet Pimpernel has some advice for our hero...


"You are a mad idealist, my dear Déroulède!" "How can I help it? I have lived under the same roof with her for three weeks now. I have begun to understand what a saint is like." "And 'twill be when you understand that your idol has feet of clay that you'll learn the real lesson of love," said Blakeney earnestly. "Is it love to worship a saint in heaven, whom you dare not touch, who hovers above you like a cloud, which floats away from you even as you gaze? To love is to feel one being in the world at one with us, our equal in sin as well as in virtue. To love, for us men, is to clasp one woman with our arms, feeling that she lives and breathes just as we do, suffers as we do, thinks with us, loves with us, and, above all, sins with us. Your mock saint who stands in a niche is not a woman if she have not suffered, still less a woman if she have not sinned. Fall at the feet of your idol an you wish, but drag her down to your level after that—the only level she should ever reach, that of your heart."

I will admit there is drama. But. I enjoyed every moment of it.


Love, the great, the strong, the conquering god—Love that subdues a world, and rides roughshod over principle, virtue, tradition, over home, kindred, and religion—what cares he for the easy conquest of the pathetic being, who appeals to his sympathy? Love means equality—the same height of heroism or of sin. When Love stoops to pity, he has ceased to soar in the boundless space, that rarefied atmosphere wherein man feels himself made at last truly in the image of God.

She would have stilled, an she could, the beating of her heart, which went out to him at last with all the passionate intensity of her great, pent-up love. Every word he spoke had its echo within her very soul, and she tried not to hear his tender appeal, not to see his dark head bending in worship before her. She tried to forget his presence, not to know that he was there—he, the man whom she had betrayed to serve her own miserable vengeance, whom in her mad, exalted rage she had thought that she hated, but whom she now knew that she loved better than her life, better than her soul, her traditions, or her oath. Now, at this moment, she made every effort to conjure up the vision of her brother brought home dead upon a stretcher, of her father's declining years, rendered hideous by the mind unhinged through the great sorrow.

They were all alone these two in the mad and beautiful world, which man has created for himself—the world of romance—that world more wonderful than any heaven, where only those may enter who have learned the sweet lesson of love.

The god of love may be blind, tradition has so decreed it, but the demon of jealousy has a hundred eyes, more keen than those of the lynx.

What neither fear nor remorse, sorrow nor joy, could do, that the great and mighty Shadow accomplished in a trice. Juliette, looking death bravely in the face, held out her hand, and sought that of the man she loved. There was not one word spoken between them, not even a murmur. Déroulède, with the unerring instinct of his own unselfish passion, understood all that the tiny hand wished to convey to him. In a moment everything was forgotten save the joy of this touch. Death, or the fear of death, had ceased to exist. Life was beautiful, and in the soul of these two human creatures there was perfect peace, almost perfect happiness.

I loved this one. I did. It was a perfectly satisfying read.