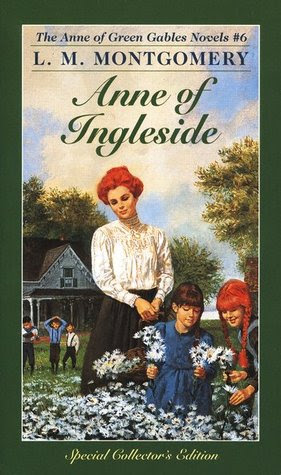 Anne of Ingleside was L.M. Montgomery's last (published) novel. In the novel, she is revisiting her most beloved heroine, Anne. The novel opens with Anne visiting Avonlea in the spring of 1900; she is pregnant with Rilla. She is spending time with Marilla and Mrs. Lynde, of course, and making time to spend one whole day with Diana. If memory serves, Diana is not really mentioned again in the series (Rainbow Valley, Rilla of Ingleside). After a short visit, she returns to her own home, her waiting family. There is Gilbert, of course, and Susan Baker, and her five children: Jem, Walter, Nan and Di (the twins), and Shirley. The book, I believe, mentions around here that she's been married nine years and her oldest is seven. Imagine five children under the age of seven with one more on the way! So Anne is extremely fortunate to have Susan helping her with all those children! There is one person Anne isn't looking forward to seeing, Gilbert's Aunt Mary Maria. She comes for "two weeks" and stays over a year! The chapter on how they accidentally send her off is one of my favorites!!!

The narration of Anne of Ingleside is interesting. Readers spend time inside the minds of Anne, Jem, Walter, Di, Nan, Rilla, and perhaps Susan. I don't recall Gilbert or Shirley or Aunt Mary Maria! Montgomery devoted a certain amount of time to each child. These chapters capture different aspects of being a child, different fears and anxieties, different hopes and dreams. There is Jem's one desire for a dog who really truly loves him. There is Di's friendship troubles, I believe. Nan has a chapter about bargaining with God. My least favorite chapter, unfortunately, is near the end. Anne loses touch with reality and thinks Gilbert doesn't love her anymore and that he regrets marrying her. Seriously I'm not sure what Montgomery was thinking with this one!


The only time I feel I'm getting along a bit is when I look at pictures in the magazines. The heroes and heroines in them are beginning to look too young to me.

We'll enjoy each other's friendship today even if we are to be parted tomorrow.

Our friendship has always been a very lovely thing, Diana.
Yes...and we've always...I mean...I never could say things like you, Anne, but we have kept our old 'solemn' vow and promise' haven't we?
Always...and always will.
Anne's hand found its way into Diana's. They sat for a long time in a silence too sweet for words.

It was never quite safe to sit down on a chair at Ingleside without first making sure there wasn't a cat in it.

This is no common day, Mrs. Dr. dear, she said solemnly.
Oh, Susan, there is no such thing as a common day. Every day has something about it no other day has. Haven't you noticed?

Half an hour later, Susan, reading her nightly chapter in her Bible, came across the verse, "Withdraw thy foot from thy neighbor's house lest he weary of thee and hate thee." She put a sprig of southernwood in it to mark the spot. Even in those days, she reflected.

If a minister preaches a sermon that hits home to some particular individual people always suppose he meant it for that very person, said Anne. A hand-me-down cap is bound to fit somebody's head but it doesn't follow that it was made for him.

I do not think, Mrs. Marshall Elliott, that people in these parts say half the things they are reported to have said.

I just listened to Stiff by Mary Roach on audio and really liked the narrator. Turns out she narrates a bunch of Montgomery books, so I am thinking I may reread the series on audio in 2014. something different!

I've only read this one a couple of times, but I do remember the stories you mention--I didn't mind the Anne-thinks-Gilbert-doesn't-love-her chapter. I last read it when I was a young adult and it seemed to me that Anne's rationale and thought process were realistic, given what she and Gilbert were each dealing with at the time.