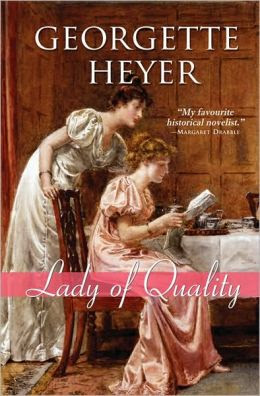 It is finished. My gloriously grand goal of reading all of Georgette Heyer's romance novels in one year, in order of publication! And it ended on a wonderful note as well. Lady of Quality is among the best of her romances. If you enjoy the friction of Much Ado About Nothing and Pride and Prejudice, you may just adore Lady of Quality. Oh how the sparks fly between the hero and heroine! These two who simply can't stand to be in the same room together, right?!

Miss Annis Wychwood is almost thirty years old. And in that time, the Regency period, thirty might as well have been sixty. Spinster is spinster no matter if you're thirty, blond, and witty or wrinkly, gray, and stubborn. But Annis is comfortable in her singleness. Or at least she prefers to see herself as comfortable. It helps that in Annis' situation, she's wealthy enough to have her own house and household. (By household I mean servants and such). If Annis had to live under her brother's roof, well, it would be a different story altogether. She does NOT get along with her brother, Geoffrey, though she does get along in a way with her sister-in-law. Yes, folks might think it a bit strange that she'd rather be independent and living on her own--and a good day's travel away from her brother and his wife--but they've become accustomed to it. But when our novel opens, Annis is about to do something a bit more unexpected, a bit more shocking.

Lucilla Carleton is just a young thing--not even eighteen--when she decides to run away from her aunt. (Her aunt is her primary guardian.) Her aunt wants her to marry the son of her father's best friend. A man, Ninian, that she's practically grown up with. It's not that she doesn't like him. But she doesn't like him like him. At least she says as much. As does he when given the opportunity. (The two like to bicker about how they don't want to be together.) Annis comes across this bickering pair on her way to Bath. Their carriage (or vehicle) has broken down--a problem with one of the wheels. Annis is too much of a lady to leave the poor girl in distress. She invites the young woman to come with her, to stay with her. Through their trip and the first day back at home, Annis hears all about Lucilla, her aunt, Ninian, and his over-bearing parents the Lord and Lady Iverley. Lucilla has runaway it's true but it's because her aunt is passive aggressive. She manipulates through tears and pleas and looks.

What is Annis to do? Welcome her home to this girl she barely knows yet instantly likes? Or send her packing with much tears of distress? She decides that the girl must write a letter to an aunt. She'll be allowed to stay with Miss Wychwood in Bath, it's true, but it's a temporary solution to the girl's problem. But this nice letter home has unattended results. Her aunt being of the nervous sort on the best of days writes a letter--a tear-soaked and illegible letter to the girl's legal guardian--Lucilla's Uncle Oliver. Oliver Carleton.

The last thing Annis expected was to be visited by Oliver Carleton. A man (from London) with the reputation of the worst sort. A truly grumpy, stubborn sort of man who speaks without thinking of the consequences, who enjoys speaking the truth, the whole truth, and nothing but the truth come what may. Obey society's nicety-nice rules? Not a chance! A man with a sharp but witty tongue comes to Bath to get to the bottom of this mess. He doesn't want Lucilla. He's not there to take her away, he's there to investigate this woman, this stranger who has interfered and butted into his business, his family.

Oliver and Annis. Oh the sparks will fly. Despite her claims of being ancient and spinsterly, Oliver can't help thinking that she's entirely unsuitable for chaperoning his niece. She should be the one being courted and pursued and wooed by men. She's beautiful. She's witty. She's intelligent. There's just a certain something about her that he can't ignore. Annis never in a million years thought she'd feel this way, this maddeningly confusingly wonderful feeling. She can't stand him; and yet, she keeps hoping she'll see him again.